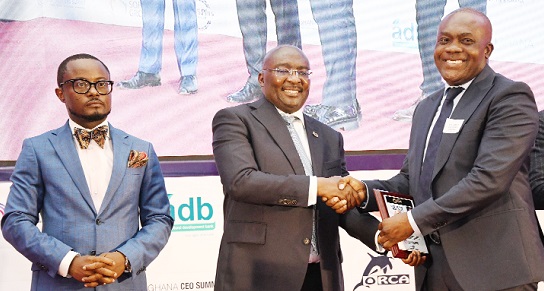 The Vice-President, Dr Mahamudu Bawumia, has charged business leaders to make a deliberate effort to employ digital leadership to run their businesses and strive to complement the government to realise its digitalisation goal.

At the sixth Ghana CEO Summit in Accra last Monday, Dr Bawumia said digitalisation led to change, and that the government was building new systems to change the old ways of doing things.

He, however, said the new systems faced resistance but urged the business leaders to be focused and have the will to continue.

The conference — which attracted dozens of CEOs, business leaders, entrepreneurs, shareholders, investors, heads of financial institutions and consultants — was to serve as an avenue for business leaders and other stakeholders to engage and share ideas.

It was dubbed: “Digital leadership for a digital economy, leading digital business and government transformation: A private-public sector CEO dialogue and learning”.

The Vice-President called on business leaders to build on the new wave of digitalisation to remain competitive.

He said the realisation of the Sustainable Development Goals (SDGs) of the United Nations required a concerted effort from both the private and the public sectors, underpinned by digital leadership, to yield results.

He expressed the hope that the summit would lead to new ideas and strategies for the benefit of Corporate Ghana and the entire country.

He said digital transformation called for the right leadership and expressed confidence that the summit would propel efforts at pushing the digital agenda forward, adding that technology drove innovation, while innovation drove development.

On the economy, he said the global architecture was going to change, as there would be more South-South cooperation and inter-African cooperation.

He, therefore, stressed the need for business leaders, and for that matter the country, to take advantage of the change and put in place systems that would allow competition.

“And that is why Ghana has taken the lead as far as the digitalisation agenda is concerned,” he said.

On the government’s digitalisation agenda, Dr Bawumia took the CEOs through the project — from the implementation of the property address system, unique identification through the use of the Ghana Card, mobile money interoperability, the institution of other digital infrastructure within some government institutions, among others.

“What we want to do next is tackle the assemblies. They are also a major bottleneck, especially when it comes to the granting of permits, and so that is where we are going to turn our attention to help digitise their operations, so that they can offer services in an efficient manner,” he said.

To that end, he acknowledged the need for Internet connectivity, on which, he said, the NCA had made significant inroads to ensure that many parts of the country had access.