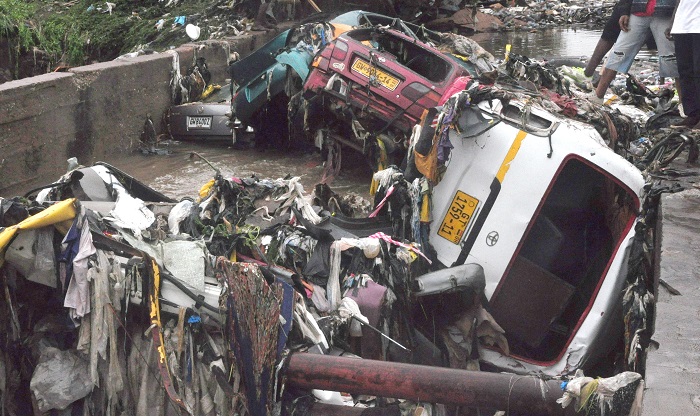 Tommorow, June 3, marks two years of the Accra fire and flood disaster, and Metropolitan Chief Executive (MCE), Mr Mohammed Adjei Sowah, says the commemoration serves as a grim reminder to the Accra Metropolitan Assembly (AMA) to keep to the commitment that never again will it allow Accra to be plunged into such an incident.

As a result of the commitment, he said the assembly had put a premium on disaster preparedness and risk reduction to prevent flooding or  manage them when they occur.

He, however, admitted that there was enormous work to be done to get there.

On June 3, 2015, Ghana was hit with the deadliest disaster in its history. One hundred and fifty-nine people who were seeking shelter at the Circle GOIL Filling Station died in an explosion after a downpour which caused massive floods in Accra.

Hundreds were also injured, while property worth millions of cedis was destroyed.

Ahead of the anniversary, the MCE told the Daily Graphic last Tuesday that “the disaster exposed Accra as a city unprepared for such calamities; but we have learnt lessons and we hope not to get to those dark days again.”

Mr Sowah said after the incident, the government solicited the support of the World Bank to undertake a Community Strength Diagnostic Analysis of Accra,  the report of which was launched last Tuesday.

“The report made some exposures, including the fact that Accra does not have a proper coordinating and governance structure to manage disasters when they occur. The government and city authorities must look at it critically. We must look at the resilience of the city to manage stress and shocks,” he stated.

Mr Sowah said the AMA had set up a city resilience and sustainability office, with an expert whose duties would involve safety, health and environment.

“We are leveraging technical and financial support for the city resilience project to help Accra adapt to shocks,” he added.

The MCE further stated that the AMA was working on the re-engineering of the city’s drains by widening and covering them in order to contain the strong running waters.

These are capital intensive projects, but the Chief Executive believes efforts will be made to find the money for the works, with the support of the government.

Even as the assembly looks for the funds for Mr Sowah projects, the mayor said the assembly had ensured that the clearing of drains was undertaken twice every year.

He said the Odaw River, which easily bursts its banks when it rains, was being dredged.

On waste management, Mr Sowah said the attitude of the people remained a source of concern and added that “as we look at floods, we must focus on waste disposal.”

He said the AMA was working with the private sector to introduce innovative waste management practices.

He said the assembly would enforce the bye-laws on sanitation, waste management and illegal development, including the siting of filling stations.

The horrific scenes of the disaster triggered an outpouring of grief across the country.

To many, the catastrophic spectacles were a searing indictment of the AMA's performance as it exposed the national capital’s failure in emergency response, waste management, drainage infrastructure, planning and local administration.

He said the AMA was introducing fresh initiatives into waste management and planning to prevent flooding.

After the disaster, the government set up a five-member committee chaired by a retired Justice of the Court of Appeal, Mr Justice Isaac Douse, to investigate the causes of the disaster and make recommendations to prevent recurrence.

The committee established that  five houses, including the GOIL Filling Station, were damaged, while other properties suffered minor damages.

Also burnt were 17 vehicles, including a fuel tanker, a mini mart at the filling station, the Bediako Pharmacy and the Honest Chef Restaurant.

Besides, the committee established that the fire started from somewhere before travelling to cause the explosion at the filling station.

It recommended the complete dredging of the Odaw River, as well as the banning of the use of plastics as carrier bags.

The committee also recommended the use of air ambulances and helicopter fire fighters to be managed by the Ghana Air Force, in fighting fire outbreaks.

It urged the government to set up a fund to cater for the injured and deceased families.

Mr Sowah said when the disaster happened, the government and the AMA organised support for the injured victims and families of those who perished and “records are that about 95 per cent of the victims have been compensated.”

Meanwhile, the AMA has released a programme to commemorate the sad event.

Today, there is a clean-up exercise at Odawna (beginning from 7 a.m.) to be followed by a remembrance service and candle light procession from the Ernest Bruce Memorial Methodist Church to the disaster site from 5 p.m.

On Saturday, there will be a remembrance service at the Calvary Baptist Church, Adabraka, followed by a wreath-laying ceremony at the disaster site.

“In remembering these fallen Ghanaians, the AMA is hereby inviting the general public, surviving victims and families of all those who lost their lives in that flood-fire tragedy,” a statement from the AMA, signed by the head of public affairs of AMA, Numo Blafo III, said.