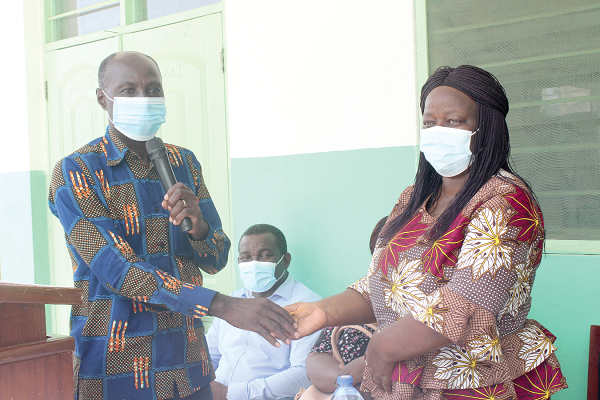 A newly built six-unit classroom block of the Kaneshie Senior High Technical School (KATECO) has been handed over to the Ministry of Education.

The block, which is the ground floor of an 18-unit block, marks the completion of the first phase of the project.

The keys to the classroom block were handed over by an engineer from Ecobuild Consult, Mr Edward Ansah, to the headmistress of the school, Ms Pearl Bruce.

In his speech, Mr Ansah mentioned that the project, scheduled to have begun in May 2019, was initially meant to be a six-unit block.

The leadership of the school, he explained, however requested that the building be changed to an 18-unit block to adequately accommodate the students.

The request, he said, was granted and work officially began in September, 2019.

The ground floor, consisting of six classrooms, which was handed over, was completed on February 1, 2021, he added.

Mr Ansah advised that the building be kept and maintained very well in order to keep it strong.

“It is my prayer that in the next three to four years, I’ll come here to see the edifice the same as it is now,” he said.

Ms Bruce, in her speech, expressed her appreciation to the President and the Ministry of Education for identifying the needs of the school and providing solutions.

“On our part as a school, we do promise that we would ensure that we maintain it the way it is,” she said.

She promised to ensure that the building was well maintained and advised students to avoid touching the walls as that made them dirty.