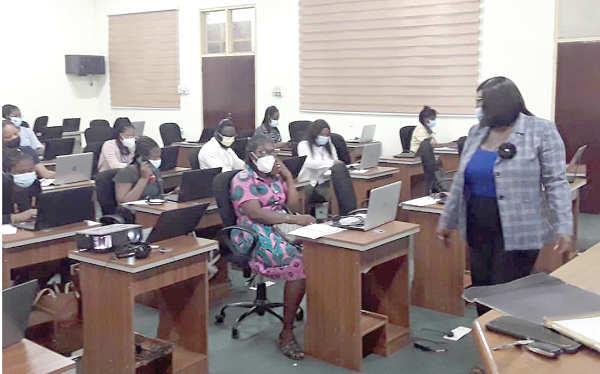 A total of 90,040 out of the 151,266 students who have been directed to do self-placements into senior high, technical and vocational schools have successfully completed the process in the first two days.

That brings the number of successfully placed candidates to 422,701.

When the Daily Graphic visited the call centre yesterday (Tuesday March 2), a giant screen had been mounted to provide on-the-second live-feed update.

At the call centres, the personnel in charge were busily answering questions ranging from the self-placement, request for replacement and complaints of non-placement.

All the 100 personnel were seen with their headsets responding to calls, with some people requesting to physically visit the call centres.

The Director-General of the Ghana Education Service (GES) Professor Kwasi Opoku-Amankwa, in an interview with the Daily Graphic, said the total number of students who had printed out their placement forms and gone to their respective schools to enrol stood at 3,303 as of 3.30p.m. yesterday.

Prof. Opoku-Amankwa described the trend as encouraging, explaining that it was still early days yet but was confident that the students would take advantage of the opportunity to enrol and enjoy the Free SHS.

He advised the students, who were yet to check their placement, to do so in order to enrol and report to school early for academic work to begin.

Prof. Opoku-Amankwa explained that the personnel at the call centres had been trained to respond to all concerns of students and parents.

He, however, explained that issues that were technical and beyond their capability were referred to the technical personnel of the GES to be resolved and those who presented the complaints were notified that their concerns were being worked on.

Prof. Opoku-Amankwa told the Daily Graphic that the issue of the placement was not about vacancies, “it is about choices.”

A total number of 523,933 candidates were presented for placement, out of which 482,574 were deemed qualified to be placed.

In all, 41,359 were disqualified from the placement basically because they either failed in Mathematics or English or both.

The number that was automatically placed was 331,308.