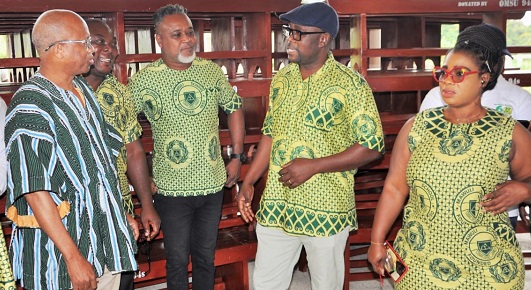 Elias Dey (2nd from right), president of the 1994 Year Group, and Jonathan Gustav Adomah (left), Headmaster of the school, in a hearty chat after the presentation Follow @Graphicgh

In a frantic move to avert feeding problems on campus, the authorities of Ho Mawuli School have engaged four national service personnel and four casual workers to manage the kitchen.

This comes in the wake of the strike action by the various teachers’ unions including the Teachers’ and Educational Workers Union to which the kitchen workers belong.

The move is also in conflict with the assurance from the General Manager of the E.P. Educational Unit, Jemima Adzroe, who said the kitchen workers of the unit's schools were all at post.

There are now 2,300 second and third-year students in school, while the first-year students, numbering 1,650, are not yet on campus.

The eight new kitchen recruits are woefully inadequate for the task in the kitchen which was being manned by 43 workers prior to the strike, admitted the headmaster, Jonathan Gustav Adomah.

However, he said, the move was just an interim measure to provide regular meals to the students.

Mr Adomah gave an assurance that there was enough stock of foodstuff in the kitchen, saying no student was starving now.

He disclosed these last Saturday when the 1994 SHS Year Group of the Old Mawuli Students Union (OMSU’94S) presented 100 benches worth GH¢35,000 to the school at a ceremony on the campus.

The benches are meant for the school's dining hall.

The president of the group, Elias Dey, said the gesture by OMSU' 94S was a token contribution to the basic comfort of the students and orderliness in the dining hall.

“We do not want to see the students having their meals standing,” he said.
Mr Dey, a banker, announced plans by OMSU' 94S to connect the various boreholes on the campus to a common mechanical system to ensure constant and uninterrupted flow of water in the school.

He said the group was also looking into the possibility of building a dormitory block for the school soon.

Mr Dey entreated the students to eschew all forms of anti-social behaviour and learn diligently towards a bright future.

For his part, the headmaster expressed gratitude to OMSU’94S for the benches, saying the donation was timely.

Mr Adomah said there was a high level of discipline among the students and said any support from the alumni would be utilised judiciously to raise the flag of Mawuli School to greater and astonishing heights.

The school prefect, Bless Azah-Quarshie, said the connection of the boreholes on the campus to a common system would bring a huge relief to the students.

“We will now spend less time searching for water and spend more time learning,” he said.

At the time of filing this report, the Daily Graphic gathered that personnel of the Youth Employment Agency had taken over the kitchen of OLA Senior High School, Ho.