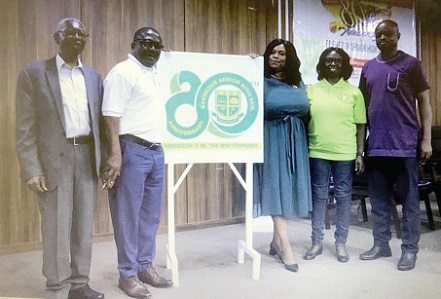 Samuel Aryee (2nd from left), Board Chairman of Ebenezer SHS; Kate Addo (3rd from right), the Director of Public Affairs of Parliament, and Anastasia Konadu, the Headmistress of the school, unveiling the 80th anniversary logo
30.5k Shares

The Headmistress of Ebenezer Senior High School, Mrs Anastasia Konadu, has lamented the lack of boarding facilities to enable the school accommodate students on campus.

She said the school had come a long way in its chequered history and needed such facilities to correspond with its profile.

Mrs Konadu made the statement on the sidelines of the launch of the 80th anniversary of the school in Accra.

She, however, lamented that 80 years without boarding facilities to cater for the growing student population was not a worthy narrative.

Mrs Konadu contended that the situation was more worrying when the school had vast land to accommodate such facilities.

The anniversary has been dubbed “Ebenezer at 80 — The way forward is to focus attention on the school’s bright prospects”.

The Director of Public Affairs of Parliament, Kate Addo, said education remained the bedrock of the sustenance of any development effort.

She said it, therefore, required the needed attention and investment to accelerate social aspirations.

Ms Addo, who is an old student of the school, advised the current crop of students to study hard to justify the investment being made in them.

This, she said, would add value to the country’s human resource base to spur growth.

The Board Chairman of the school and son of the founder of the institution, Samuel Aryee, said the school had produced many individuals who had served the nation in various capacities, but the current state of the school left much to be desired.

Mr Aryee, therefore, appealed to government, corporate institutions and old students also known as Paduans, to come to the aid of the school to provide infrastructure, especially boarding facilities.

The school was established in 1941 by the late Robert Teiko Aryee as a private institution.

It started with six students at Adedenkpo, near the Timber Market, in Accra.

In 1951, the school moved from Korle-Gonno to Mamprobi, and was housed in the Founder’s house until it was moved to its present site at Dansoman.

Its vision is to be an institution of learning where an enabling environment is created for academic excellence and unearthing of talents in co-curricular activities.

The event was attended by past students from different year groups.