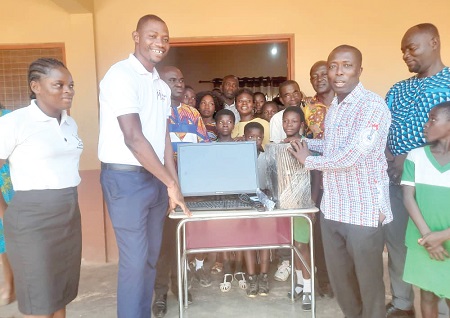 Madamfo Ghana Foundation, a non-profitable organisation operating in towns and villages in 10 regions in the country, has refurnished and handed over a modern computer lab to the Feyiase Roman Catholic Primary School in the Bosomtwe District.

The laboratory is to enhance the teaching and learning of information technology in the school and the district at large.

The foundation, which has been operating in the country for the past 20 years, provided the school with 23 computers, a printer and a projector as well as furniture worth GH¢30,000.

The computer lab is one of the many social intervention projects provided by the foundation to schools and communities across the country as part of its socio-economic contributions towards rural development.

Handing over the lab, the Assistant Managing Director of the foundation, Enoch Sunday Tiavor, said it was in response to an appeal from the school to assist them with computers to enable it to effectively teach the pupils ICT.

He said the foundation had provided a lot of support and projects in all the regions it was operating and would not relent in its effort to give help to the needy.

Mr Tiavor assured the school that the foundation would assess the need for a toilet facility situation and provide the necessary support.

The Headmaster of Feyiase Roman Catholic Primary School, Owusu Banahene, expressed the school's appreciation to the foundation for the kind gesture.

He said the lack of computers was one of the main challenges facing the teaching of ICT in the school.

According to him, most of the children did not have access to computers for the practical learning of the subject.

He further appealed to the foundation to assist the school with a toilet facility as the over 1,000 population did not have access to a decent toilet and resorted to nearby bushes to attend to nature's call.

The Assistant Director of Education Management Information System (ENIS) at the Bosomtwe District Assembly Education Unit, Thomas Baafi, lauded the foundation for the immense support it has given to the district, especially the education unit, over the years.

He appealed for support for other schools in the district that did not have access to computers for effective teaching and learning of ICT.