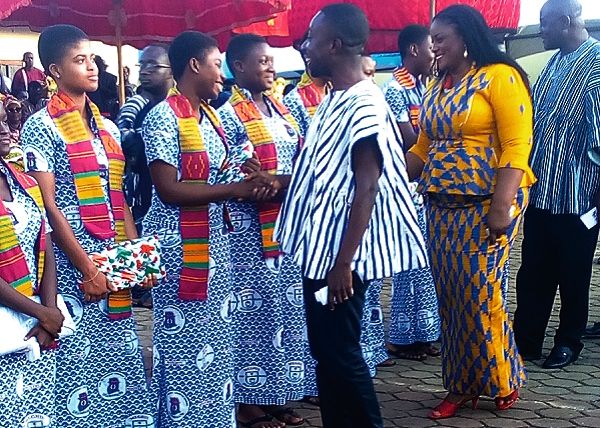 The Government is to construct a classroom block, fully furnished, for the Mamfe Methodist Girls Senior High School (MEGHIS) in the Akuapem North Municipality in the Eastern Region, in recognition of the excellent performance of a team of students from the school, who participated and won the 2019 World Robofest Competition held in Michigan, USA.

A Deputy Minister of Education in charge of General Education, Dr Yaw Osei Adutwum, who announced this at a durbar at Mamfe to honour the 10 students and their coordinators, said the performance had brought honour, not only to the Mamfe community, the Akuapem Traditional area and the Akuapem North Municipal Assembly, but the Eastern Region and the country at large.

The durbar was organised by Kyidomman Council of Mamfe, in collaboration with the Akuapem Traditional Council and Akuapem North Municipal Assembly.

The event also coincided with the fourth Akwasidae durbar of the chiefs and people of Mamfe.

Students from the school took part in this year’s Robofest Competition held in Michigan, USA, where they emerged winners in the competition which was fiercely contested by about 600 students from 15 different countries.

The Robofest, an international competition for junior high and senior high schools, was invented in 1999, and has, since its inception, seen more than 28,000 students competing worldwide.

It features robots that are completely autonomous and controlled solely by joystick and are instructed to perform different tasks at different stages of the competition.

“Let me say that the girls from this school, which we have heard much about, have raised the flag of all the areas I have mentioned very high, and made us very proud, and they deserve commendation and appreciation to serve as an example to all other schools,” the deputy minister stressed.

He congratulated the 10 students and their two trainers and stressed the need for other schools to emulate the achievement of MEGHIS, adding that, the government was ready to support the school and other schools for excellent academic performance.

The deputy minister expressed concern about the falling standard of education, especially at the basic level, emphasising that, ‘‘we shall find an antidote to the challenge to make education very attractive’’.

He announced that one of the trainers who trained the girls, Mr Benjamin Gyasi, had been employed into the Ghana Education Service (GES) as a full-time teacher as his reward.

Dr Adutwum mentioned that the Robotic activity would be extended to the basic schools with effect from next academic year, to serve as a major activity in the schools.

The Mamfehene and Kyidomhene of Akuapem, Osabarima Ansah Sasraku III, lauded the school for the achievement that had enhanced the image of the Akuapem Traditional area.

He said the school needed a lot of educational materials to do more, adding that, a GH¢5 million Education Endowment Fund would be launched soon by the Akuapem Traditional Council and the municipal assembly to raise money for the development of the school.

The Akuapem North Municipal Chief Executive, Mr Dennis Edward Aboagye, on behalf of the assembly, presented GH¢ 2,000 to each of the contestants as their reward.

The Headmistress of the school, Ms Sylvia Issabela Laryea, said it was very difficult when the school won the competition to travel outside and thanked individuals and corporate organisations who supported the school in kind and cash.

In addition to what the government has planned to do, she appealed for the refurbishment of the e-Learning block in the school to meet international standards.

The Kyidomman Council presented the 10 girls and their trainers with cash and pieces of cloth.

In the same way, the Paramount Queenmother of the Akuapem Traditional Area, Nana Afua Nketiaa Obuo II, also presented them with parcels as her contribution to their success.

In a related development, the Eastern Regional Minister, Mr Eric Kwakye Darfuor, observed that the exploits in science by the school was a classic example of what girls could do when given the needed support, according to the Ghana News Agency (GNA).

Mr Darfuor, who said this when the winners of the World Robofest Competition called on him at his office, commended the girls for contesting with advanced countries in technology like Japan, Korea and the USA and thanked the two coordinators of the team and the headmistress, Mrs Laryea, for their hard work and perseverance that had brought them that far.