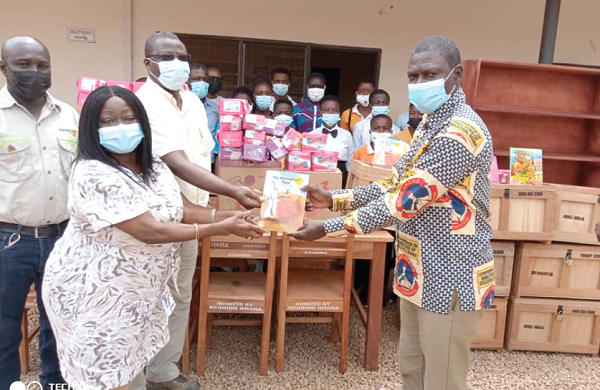 From as low as a 30 per cent pass rate, the story in basic schools in the Amansie West and South districts has changed and students have recorded dramatic average improvement in their Basic Education Certificate Examination (BECE) results between 65 per cent and 95 per cent in the last two years.

Beyond that, some products from schools in the areas have found themselves in some top senior high schools (SHS) in the Ashanti Region including Prempeh College and Opoku Ware, which hitherto was not the situation.

Six years ago, Asanko and CODE each contributed 600,000 Canadian dollars towards the literacy project in the two districts to help prop up the reading culture among students, build their confidence and improve academic performance.

The project includes the provision of reading materials, training of more than 300 teachers and organising competitions and debates to build students’ confidence. It is being implemented by the Ghana Book Trust.

Mr Darko announced that the results in the last year's BECE was refreshing, saying that the schools recorded an average of 95 per cent pass rate.

He was speaking at the Koninase-Nkran D/A Primary School when Asanko and CODE presented boxes of reading materials to the school and also stocked their library.

The two bodies also presented similar materials to the Manso Abiram plus a numbers of sanitary pads to girls, all in the Amansie South District.

The Unit Manager, Land Access, Asanko, Isaac Kwabena Kwaakye, who stood in for the Sustainability Manager of the company, Rammy Oboro, said the investment in the students was Asanko's contribution towards preparing them to be able to compete favourably for a space in the mines in future.

The Executive Director, Ghana Book Trust, Ms Genevieve Aba-Polley, said in addition to the project, a mobile library clinic from the Ghana Library Authority had also been rolled out to cover other remote areas.