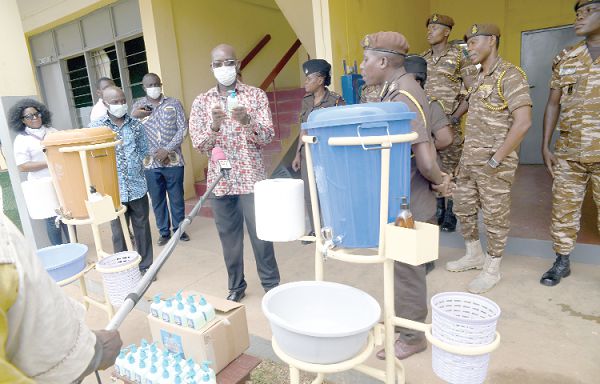 Prof. Edmund Ameko (arrowed) showing one of the hand sanitisers to the Prison Officers
30.5k Shares

The Accra Technical University (ATU) has supported the Senior Correctional Centre (SCC) in Accra with items to protect both the officers and the inmates against the spread of the covid-19 in the facility.

At the presentation last Friday, the acting Pro Vice-Chancellor of the ATU, Prof. Edmund Ameko, said the move was part of the school’s effort in helping to enhance the safety of staff in some government institutions in the country.

He said it was the time when institutions and companies in the country had to prove their worth to the country, indicating that the government was doing its best to help curb the spread but without extra support, it would all be in vain.

He said the school saw it very necessary to bring each and everyone on board to decide on what it could produce in order to help in fighting this pandemic.

“Our students are trained in how to produce hand sanitisers and we realised there was shortage in the country so we took it upon ourselves to start producing them in large quantities and donate to some key institutions,” Mr Ameko said.

They have been approved by the Food and Drugs Authority (FDA) and we are going to put some on the market at a very moderate price so that every average Ghanaian can afford one,” he added.

He said the items had come at the time the prison needed it most, adding that “the safety of our inmates is very key in helping to prevent the spread because if one is infected, you can imagine the number of inmates who will be infected.”

He said they were going to ensure that each cell room had at least one sanitiser to be shared among its members, while some would also be placed at vantage points for the prison officers.

The PRO added that as part of its effort to avoid the spread of the virus in the yard, they had instituted some measures which included ban on visiting and church or religious related activities.

“We are trying our best but these are not enough, we need more protective equipment, we know sharing contributes to the spread of the disease and that is why we want each inmate to have his own personal sanitiser,” he said.