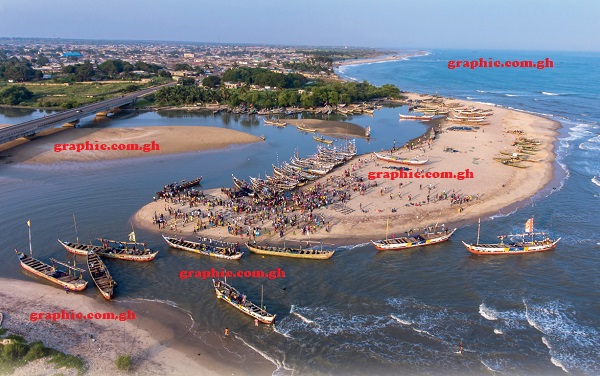 The town of Old Ningo, one of the oldest European settlements in Ghana, is situated along the coast on the Gulf of Guinea, in the Ningo-Prampram District of the Greater Accra Region.

The Ningo Prampram District is one of the 29 districts in the Greater Accra Region.

It was formerly part of the Dangme West District until the southern part of the district was split off to create the Ningo-Prampram District in June, 2012.

The current population of the district based on the 2021 population census is 204,673 with Prampram as its capital town.

Also known as Great Ningo, the town is a fishing and farming community. The inhabitants form part of the Ga-Dangbe people.

The original name of the people of Ningo is Lasibi. This is part of the eight tribes who are identifi ed as the Dangme State.

The name Ningo has a much more widely known and accepted history derived from the Ga–Dangme words ‘nu’ meaning water and ‘ngoo’ meaning salt.

Another version other than the ‘nu’ and ‘ngoo’ story is that Ningo was derived from the early European settlers.

The story has it that there was a high mountain seen about 20 or 25 miles from the sea, and apparently capped with snow. And as it goes the mariners might have seen the mountain in the backdrop of the native settlers and thought it was snow and named the place Ningo.

This gives evidence to a voyagers’ inspired name as the name Ningo happens to be a Latin word for snow.

Other early writings and references on Ningo also added the term ‘grande’ which is Latin for large or great, and thus the name Great Ningo.

Nugo is the more locally accepted pronunciation of the name Ningo and the people like to refer to themselves as ‘Nugoli’ meaning ‘people of Nugo’ and are proud to associate themselves with the name Great Ningo.

The landing beach at Old Ningo, a fishing community, provides a picturesque view on a very busy.