World powers have agreed to seek a nationwide "cessation of hostilities" in Syria to begin in a week's time, after talks in Munich, Germany.

The halt will not apply to the battle against jihadist groups Islamic State (IS) and al-Nusra Front.

The announcement comes as the Syrian army, backed by Russian air strikes, advances in Aleppo province.

The move threatens to encircle tens of thousands of civilians in rebel-held parts of the major city of Aleppo.

The Syrian government and the main opposition groups have not said whether they will implement the ceasefire.

More than 250,000 people have been killed in almost five years of fighting in Syria.

US Secretary of State John Kerry admitted the ceasefire plan was "ambitious" and said the real test would be whether the various parties honoured the commitments.

"What we have here are words on paper, what we need to see in the next few days are actions on the ground," he said.

A task force chaired by the US and Russia will work to implement the truce through consultations with Syria's rival groups.

Aid deliveries for besieged Syrian communities are due to begin as early as Friday.

Both Sergei Lavrov and John Kerry admitted, repeatedly, this was only progress on paper. Some diplomats are already saying "it's not worth the paper it's printed on".

There are still major gaps. One of the biggest is that Russia's bombing of Aleppo and what it calls terrorist targets is not included in the possible truce even though its actions are seen by many as strengthening Syrian government forces.

On the issue of delivering desperately needed aid to besieged areas, UN officials say they are determined to seize this new opening.

The next week will confirm whether Syria's government and opposition forces are ready to provide access denied for so long.

It will be a week which tests the commitment of all outside players, as well as Syrians on all sides.

That, in itself, is some progress. But moving towards talks to end Syria's devastating war will still take far more than that.

Mr Kerry made the announcement alongside his Russian counterpart Sergei Lavrov and the UN special envoy for Syria, Staffan de Mistura.

Mr Lavrov said there were "reasons to hope we have done a great job today". An earlier proposal from Russia envisaged a truce starting on 1 March.

At the press conference Mr Kerry again suggested that Russian strikes were targeting what the West sees as moderate opposition forces, rather than terrorists, as Moscow says.

British Foreign Secretary Philip Hammond said the cessation would only work if Russia halted its raids, although Mr Lavrov said they would continue. 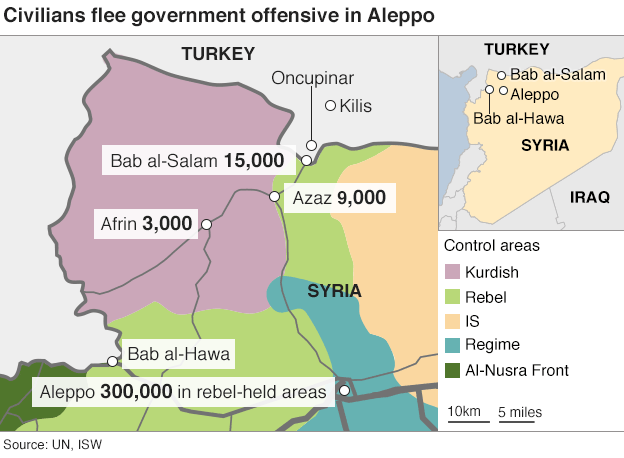 The ISSG also agreed that peace talks involving the Syrian government and rebels should resume as soon as possible.

Initial talks were suspended just days after they began earlier this month in Geneva, in the wake of the Aleppo offensive.

Thousands of people displaced by the fighting have been stranded at the border with Turkey and aid agencies have warned of a rapidly deteriorating humanitarian situation.

A spokesman for the Syrian opposition, Salem al-Meslet, told the BBC "if we see action and implementation on the ground, we will be soon in Geneva"

Why is there a war in Syria?

Anti-government protests developed into a civil war that, four years on, has ground to a stalemate, with the Assad government, Islamic State, an array of Syrian rebels and Kurdish fighters all holding territory.

Who is fighting whom?

Government forces concentrated in Damascus and the centre and west of Syria are fighting the jihadists of Islamic State and al-Nusra Front, as well as less numerous so-called "moderate" rebel groups, who are strongest in the north and east. These groups are also battling each other.

How has the world reacted?

Iran, Russia and Lebanon's Hezbollah movement are propping up the Alawite-led Assad government, while Turkey, Saudi Arabia and Qatar back the more moderate Sunni-dominated opposition, along with the US, UK and France. Hezbollah and Iran are believed to have troops and officers on the ground, while a Western-led coalition and Russia are carrying out air strikes.