Millions of voters across Iran have been casting their ballots in the country's presidential elections.
With long queues outside polling stations well into the afternoon, the interior ministry extended voting by three hours, until 21:00 (16:30 GMT).

Although all six candidates are seen as conservatives, one of them, cleric Hassan Rouhani, has been reaching out to the reformists in recent days.

The election will decide a successor to outgoing leader Mahmoud Ahmadinejad.

His eight years in power have been characterised by economic turmoil and Western sanctions against Iran over its controversial nuclear programme.

Some 50 million people are eligible to vote. Ballot counting is expected to start at midnight local time and results are due to be announced in the following 24 hours.

Interior Minister Mostafa Mohammad Najjar told state TV that presidential candidates would have three days to lodge complaints to the vetting body, the Guardian Council, if they were unhappy with the results.

The past week brought a surprising change to what otherwise had looked like being a predictable election, the BBC's Richard Galpin reports.

Mr Rouhani has been attracting increasing attention, speaking publicly about the need to re-engage with the West, our correspondent says.

He has also promised to free political prisoners and called for greater reform of the media.

The surge of support for him came after Mohammad Reza Aref, the only reformist candidate in the race, announced on Tuesday that he was withdrawing his candidature on the advice of pro-reform ex-President Mohammad Khatami.

Mr Rouhani now has the endorsement of two ex-presidents, Mr Khatami and Akbar Hashemi Rafsanjani, who was disqualified from the race by the powerful Guardian Council.

He has called for a large turnout but not publicly backed any single candidate. 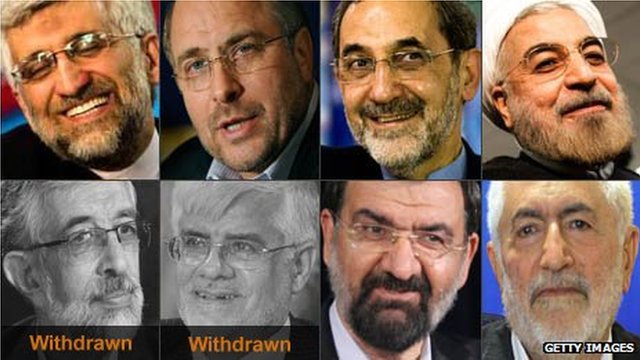 After casting his vote early, the supreme leader spoke live on state television.

He also attacked US criticism of the presidential poll and those, in the US, who said they did not recognise the election.

"The Iranian people... will do what is in their interest."

If no candidate secures 50.1% or more of the vote a second round will be held in a week's time.

Municipal elections also being held on Friday are being hotly contested in many towns and villages because of competition between families and tribes, the BBC's Mohsen Asgari says.

Friday's presidential election is the first since 2009 when protesters took to the streets in anger at the results which they said had been rigged in favour of Mr Ahmadinejad.

But the disqualification of Mr Rafsanjani in May left supporters of the post-2009 liberal movement divided about whether to bother voting in the election at all.

No foreign observers will be monitoring the poll and there have also been concerns that media coverage in the run-up was unfair.

Many reform newspapers have been shut down, access to the internet and foreign broadcasters restricted, and journalists detained.

On Thursday, the BBC accused the Iranian authorities of putting "unprecedented levels of intimidation" on BBC employees' families.

It said Iran had warned the families of 15 BBC Persian Service staff that they must stop working for the BBC or their lives in London would be endangered.

Tehran has so far made no comment on the allegation.