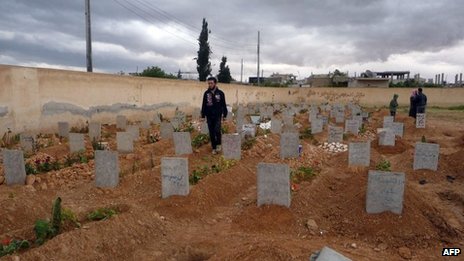 At least 93,000 people have been killed in Syria since the start of the conflict, according to latest United Nations figures.
This represents a rise of more than 30,000 since the UN last issued figures covering the period to November 2012.

At least 5,000 people have been dying in Syria every month since last July, the UN's human rights body says.

But it says these statistics are an underestimate as it believes many deaths have not been reported.

Over 80% of those killed were men, but the UN's Office of the High Commissioner for Human Rights (OHCHR) says it has also documented the deaths of more than 1,700 children under the age of 10.

There were "cases of individual children being tortured and executed, and entire families, including babies, being massacred - which, along with this devastatingly high death toll, is a terrible reminder of just how vicious this conflict has become," said OHCHR head Navi Pillay.

The revised toll came the day after a separate global UN report called the number of deaths among Syrian children "unbearable".

The study said government forces and rebels were using boys and girls as "suicide bombers or human shields".

Children in Syria were suffering "maybe the heaviest toll" of anywhere in the world, said UN special representative Leila Zerrougui, who presented the findings .

The report accused Syrian troops of torturing children suspected of having links to rebel groups. 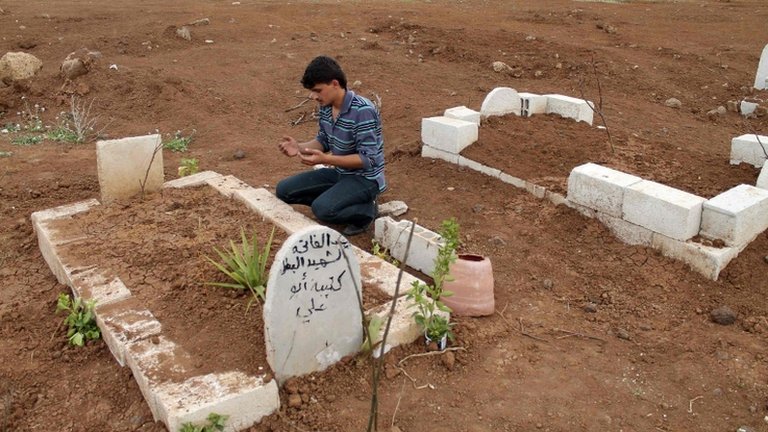 But it said armed opposition groups, including the Free Syrian Army, were also using children, both in combat and in support roles such as transporting supplies and loading cartridges.

OHCHR'S report said the biggest numbers of documented killings throughout the conflict have been recorded in the governorates of rural Damascus (17,800 deaths), Homs (16,400), and Aleppo (11,900).

The sharpest increases in deaths since November 2012 were recorded in the governorates which surround Damascus and Aleppo with 6,200 and 4,800 new documented deaths respectively.

OHCHR said the toll had been compiled by a non-profit organisation which specialises in statistical analysis, using the following steps:

OHCHR called for an immediate ceasefire "before tens of thousands more people are killed or injured".

Ms Pillay said that "states with influence could, if they act collectively, do a lot more to bring the conflict to a swift end, thereby saving countless more lives".

"Civilians are bearing the brunt of widespread, violent and often indiscriminate attacks which are devastating whole swathes of major towns and cities, as well as outlying villages," Ms Pillay said.

"Government forces are shelling and launching aerial attacks on urban areas day in and day out, and are also using strategic missiles and cluster and thermobaric bombs.

"Opposition forces have also shelled residential areas, albeit using less fire-power, and there have been multiple bombings resulting in casualties in the heart of cities, especially Damascus," she went on.