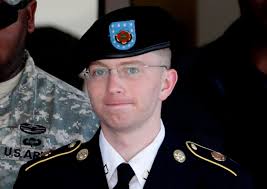 A military judge has refused to dismiss the most serious charge facing a US soldier accused of leaking thousands of secret documents.

Lawyers for Pte Bradley Manning, 25, had argued the US has not proved that he "aided the enemy".

The charge carries a life prison term. He has previously pleaded guilty to 10 of the more than 20 charges he faces.

"He was knowingly providing intelligence to the enemy," said Judge Colonel Denise Lind in Thursday's hearing at Fort Meade, Maryland.

The decision does not rule out the possibility of Pte Manning being ultimately acquitted of the charge.

She is still considering a motion by Pte Manning's lawyers to dismiss five charges of theft.

The case, involving 700,000 files, is considered the largest-ever leak of secret US government documents.

On Monday, defence lawyer David Coombs said the Army private was guilty of negligence, but not the "general evil intent" required to justify the life charge.

He said the government had offered no evidence to show that Pte Manning knew the leaked files could fall into the hands of al-Qaeda militants.

Pte Manning's lawyer has sought to show that he was "young, naive and good-intentioned" when he arrived in Iraq, but became disillusioned.

The accused told a pre-trial hearing in February that he had divulged the documents to spark a public debate about US military and foreign policy.

Among the items sent to Wikileaks was graphic footage of an Apache helicopter attack in 2007 that killed a dozen people in the Iraqi capital Baghdad, including a Reuters photographer.

Other files leaked included thousands of battlefield reports from Afghanistan and Iraq, as well as secure messages between US embassies and the state department in Washington.