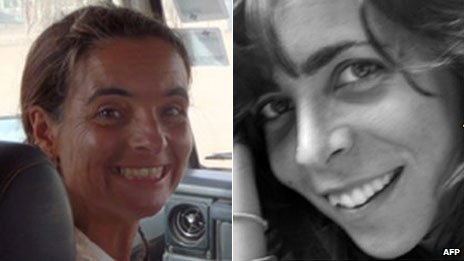 Two Spanish aid workers kidnapped in Kenya nearly two years ago and held over the border in Somali have been freed, their employer has said.

Medecins Sans Frontieres said the two women were both "safe and healthy and keen to join their loved ones".

Montserrat Serra and Blanca Thiebaut were abducted from Dadaab refugee camp in October 2011.

Following their abduction and those of other hostages, Kenya sent troops into Somalia to battle Islamist militants.

In a statement, MSF said it was with great relief that the organisation was able to confirm the women's release.

"MSF wishes to thank everyone involved in securing their safe release," it said, without giving further details about how they were freed.

"As we are still working on the return of the two girls to their homes, we ask you to respect their need for privacy at this time."

The women were kidnapped on 13 October 2011 by gunmen who opened fire on their vehicle inside the Dadaab refugee camp complex, shooting and wounding their Kenyan driver.

Dadaab, said to be the world's largest refugee camp, houses some 500,000 people who have fled years of conflict and drought across the border in Somalia.

Both women were working as logisticians for MSF in Dadaab.

Ms Serra, a qualified teacher from Girona in Spain, had been working in Kenya for two months before she was kidnapped. She had previously worked on aid projects in Latin America and Yemen.

An agricultural engineer by training, Ms Thiebaut from Madrid had not long finished a degree at the London School of Economics at the time of her abduction.

Kenya accused the al-Qaeda-aligned group al-Shabab of being behind their kidnapping and a spate of others in 2011, thus threatening the country's security.

It sent troops into Somalia to pursue them and later seized most of the border region from al-Shabab.

Its soldiers in Somalia have now been absorbed into the African Union (AU) force which is helping the weak Somali government.

Although the AU and Somali government have driven al-Shabab from most major cities, its fighters still control smaller towns and rural areas in central and southern Somalia and they sometimes launch attacks in government-controlled territory.