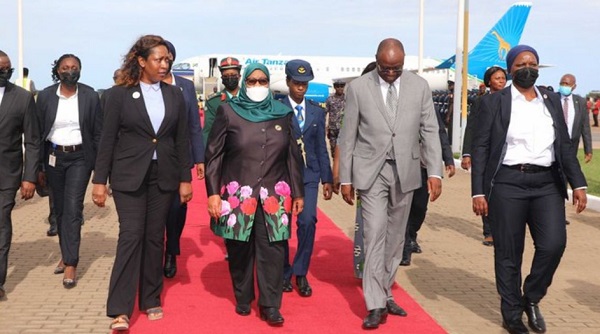 Tanzanian President Samia Suluhu Hassan is set to receive the Africa Road Builders–Babacar Ndiaye Trophy this week in Accra for demonstrating her commitment to the development of transport infrastructure on the continent.

The Tanzanian leader arrived in Ghana on Monday evening ahead of the dialogue sessions organised as part of Annual meetings of the African Development Bank (AfDB).

The selection committee for the award in April commended Hassan for her “personal leadership, huge investments and commitment” to extending roads and the railway network in Tanzania.

“We send our warm congratulations to President Samia Hassan and the people of Tanzania,” the selection committee said.

The committee noted the $290 million provided by the African Development Bank to support the revitalization of road, rail and air transport in Tanzania. It also took into account the $172.2 million contract signed with the China Corporation Limited to supply the country with 1,430 modern freight wagons to implement the ambitious Tanzania Railways Corporation railway program. Finally, the committee noted the official start of construction on the historic project to build an outer ring road around the city of Dodoma. This project was launched by President Hassan on 11 February, in the presence of the President of the African Development Bank Group, Dr. Akinwumi A. Adesina.

Currently the only female head of state in Africa, Hassan came to power in March 2021, following the death of President John Magufuli, under whom she served as Vice-President.

Sponsored by the African Development Bank’s Adesina, the Africa Road Builders Babacar Ndiaye Trophy is organized by Acturoutes, an information platform on infrastructure and roads in Africa, and the organization Media for Infrastructure and Finance in Africa (MIFA), a network of African journalists specializing in road infrastructure. Nigerian President Muhammadu Buhari received the award in 2021.

The trophy was instituted in honour of Babacar Ndiaye, President of the African Development Bank Group from 1985 to 1995.