The South African Ambassador to Ghana, Mrs Jeanette Ndhlovu, has thrown a challenge to the world and Africa in particular to sustain the rich legacy of Nelson Mandela (Madiba), which is equality and justice for all mankind.

According to the South African envoy, South Africans and Ghanaians must also join hands to embrace the Mandela spirit of unity in action to build a formidable society for all.

Sharing some insights into the working knowledge of the great statesman to mark his birthday which fell on July 18, Ambassador Ndhlovu said “the world must strive to build on the enduring legacy of Mandela and unite to ensure that his legacy stays forever.”

In an interview on Friday, she said that all stakeholders in the field of governance, including the private and public institutions, as well as NGOs, have roles to play in sustaining the Mandela legacy.

July 18 each year has been recognised by the UN General Assembly as Mandela Day, and is dedicated to equality, development and sharing of gifts.

According to Mrs Ndhlovu, Nelson Mandela International Day has become a global phenomenon which is also geared towards education, food security and equality.

She said that civil society and businesses must unite in action to meet the global objectives, particularly in Africa.

“I think Madiba is a fantastic human being,” says Mrs Ndhlovu, who further points out that “Madiba is a man full of humility, wise and cares for the ordinary people.”

Like Ghana’s first President, Dr Kwame Nkrumah, who argued that “the independence of Ghana is meaningless unless it is linked up with the total liberation of the African continent,” the South African envoy states that the First Black African President of South Africa, Nelson Mandela, also desires to see Africa asserting itself and showing to the global community that we are human and equal to the task of nation building.

She said that the life of Nelson Mandela epitomised what in the Zulu language is referred to as “uBuntu,” something which affirms our common humanity.

According to the South African envoy, meeting Madiba makes you feel humble, saying “the day I met Madiba,  I left him a transformed human being”.

Through Madiba, I have learnt to deal with both the poor and high in society on equal basis.

“Madiba always urges us to serve and treat each other with respect and dignity no matter one’s class in society,” Ambassador Ndhlovu stated.

His amazing virtues, I believe were nurtured when he was a young boy growing in the village of Qunu in the Eastern Cape (Transkei)), Mrs Ndhlovu told the Daily Graphic.

“I think during our childhood the impressions we get as young children growing up forms our thoughts and make us what we are in future,” she added.

Madiba had plenty of virtuous upbringing and I believe till his formative years, he had embraced these rare good qualities.

She further said that when Nelson Mandela moved to the urban centres, his sense of justice and fairness also came to dominate his life.

In the urban centres during his time, where there was apartheid, segregation, human rights abuse, Nelson Mandela became so resentful of those vices, Ambassador Ndhlovu postulated.

She recalled that when he was sentenced to prison, he declared his abhorrence and hatred for white domination or black domination and insisted on a just and fair society.

“These were the ideals he stood for and is fighting for,” Mrs Ndhlovu stated. 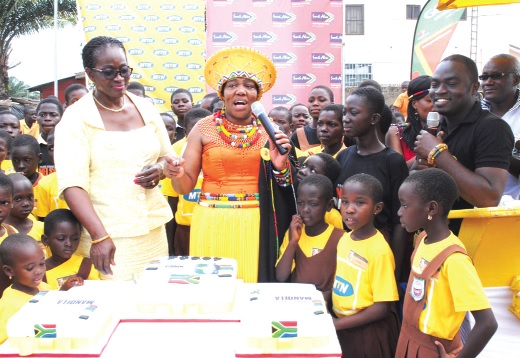 She said that the whole of July was Mandela Day, saying “the excitement this year was unbelievable: At a time we were scared he might go to the Lord, it was a happy moment to celebrate his birthday on July 18.

In Ghana, the Ambassador said through MTN’s sponsorship, Baba Yara Primary School at Madina in Accra was rehabilitated and a classroom block was inaugurated.

On July 30, the Ambassador disclosed that through the sponsorship of Gold Fields “we are inaugurating another classroom block - Bagri Junction D/A Primary School - at Lawra in the Northern Region.

She said one of the enduring legacies of Madiba was a strong foundation for education, particularly at the primary level.

We should raise children in an upright manner, Mandela insisted and had always challenged us to ensure that “we create a conducive environment so that at a young age children will learn in an atmosphere of excellence” the Ambassador stated.

"All of us have a role to play in improving the lives of African people. All of us have a responsibility to treat each other with respect no matter your class in society. That is what Mandela teaches us’’, Ambassador Ndhlovu concluded.