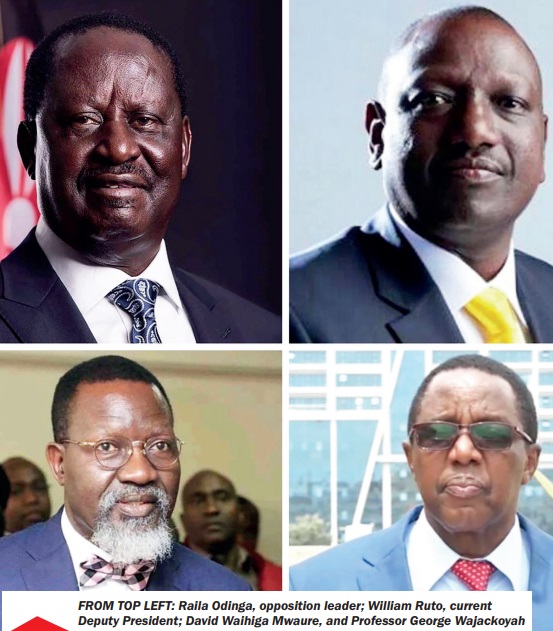 KENYA heads to the polls on August 9 for a general election where more than 22 million voters will elect the next President, members of the National Assembly and Senate, county governors of Kenya and members of the 47 county assemblies of Kenya.

Kenyatta is not eligible for a third term as he has served the maximum of two five-year terms and so are county governors who have served two terms. This year’s general election saw the lowest number of four presidential candidates cleared since multipartism was implemented in 1992.

While all four of the 2022 presidential candidates are men, three of them have chosen women as their running mates.

They are Raila Odinga, veteran opposition leader and head of the Azimio la Umoja alliance, which includes both the ruling Jubilee Party and Odinga’s Orange Democratic Party (ODM).

David Mwaure Waihiga, is a lawyer and ordained church minister who founded the Agano Party in 2006. He is making his first run for Kenya’s presidency and Professor George Wajackoyah leader of the Roots Party.

The last two candidates are both considered long shots and unlikely to win.

How the voting will work

To win, either candidate will need to win more than half of all votes cast in the election. Some observers say the outcome could be so close that it could send Kenya into a run-off for the first time. Odinga and Ruto both said that they would accept the result of the election if they lose, as long as the process is free and fair.

The results of the elections are expected to be announced by August 15. But both raised concerns about how the Independent Electoral and Boundaries Commission (IEBC) had managed aspects of the process, warning that it may affect trust in the poll.

After Kenya’s Supreme Court annulled the 2017 presidential election and blamed the IEBC, the commission has tried to be more transparent to increase trust in the process.

Kenya has an electronic voter register but actual voting and counting are done manually. Polls open nationwide at 6 a.m. on August 9 and close at 5 p.m.

For its part, the IEBC says it made minor technological changes this election period to regain trust in the voting system.

The race is expected to be close with neither of the leading candidates polling significantly higher than the other. If no candidate wins more than 50 per cent of the votes cast, the election will go into a run-off for the first time in Kenyan history.

Deputy President William Ruto, 55 and veteran opposition leader Raila Odinga, 77, are leading in opinion polls in the race to succeed term-limited President Uhuru Kenyatta and it’s a bitter battle between the former foes turned-allies-turned-foes-again vying to lead the relatively stable nation in a volatile region.

Ruto calls himself the “Hustlerin-Chief,” a reference to his humble beginnings as a chicken seller in Kenya’s Rift Valley to a heartbeat away from the most powerful office in the land, saying “We want to make this country a country of opportunity for every child in Kenya.”

Odinga, who says he is contesting for the last time, has unsuccessfully run for President four times before and challenged his loss in the last three elections, “I had considered not running this time but there was a lot of pressure on me from my supporters to run because of what I represent,” promising change if elected.

Kenyatta ditched his deputy Ruto to support Odinga, became the chair of his Azimio la Umoja (Aspiration to Unite) coalition’s campaign and brought along influential figures from his powerful Kikuyu ethnic group.

But Ruto has assembled a formidable coalition of his own named Kenya Kwanza (Kenya First), attracted many leaders from Kenyatta’s backyard and animated broad national appeal with an oft-repeated rags-to-riches story.

While he retains the title of Kenya’s Deputy President, Ruto lost most of his powers and responsibilities in 2018 when Kenyatta reconciled with his former rival Odinga, effectively neutralising the opposition.

A symbolic handshake with Odinga ended Kenyatta’s alliance with Ruto, a well-orchestrated union that had won them the presidency twice and scuttled their crimes against humanity cases at the International Criminal Court.

Both campaigns have accused the other of corruption, an intractable challenge for Kenya since it declared independence from Britain in 1963.

More than $16 million is stolen from the government daily, Kenyatta has claimed.

Ruto says that their government was “invaded by the opposition” in the second term, derailing their agenda, while Odinga denies that a win for him would be an unofficial third term for Kenyatta.

Kenyans are heading to the polls with soaring food and fuel prices, high unemployment and post-pandemic stagnation, a change in leadership could not come at a more critical time for East Africa’s largest economy.