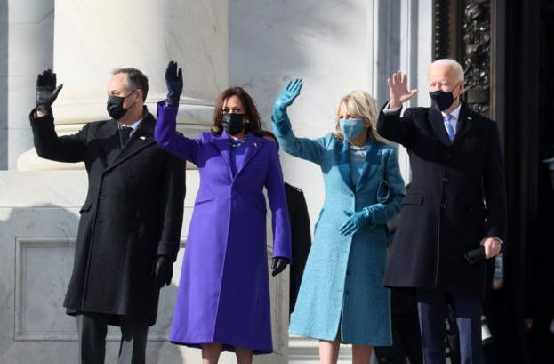 Joe Biden has arrived at the US Capitol in Washington, where he will be sworn in as 46th US President just before 17:00 GMT.

The pair started their day with a church service at the Cathedral of St Matthew in Washington.

Some 25,000 troops will guard the inauguration ceremony after a deadly riot at the Capitol earlier this month.

Donald and Melania Trump leave the White House for the last time, boarding the Marine One helicopter

The outgoing president speaks at a military send –off at Joint Base Andrews before flying to his resort in Florida.

Trump will not attend his successor’s inauguration-only the fourth president not to do so.

In the final hours of his presidency Trump pardoned 73 people, including his former adviser Steve Bannon.

Guests are beginning to arrive in advance of the inauguration ceremonies at the US Capitol.

The crowd is a thinner this year as the guest list has been limited due to Covid.

Among those seen making their way in are former President Barack Obama and former First Lady Michelle Obama, and Georgia Senator-elect Jon Ossoff, who is expected to be sworn in later today.