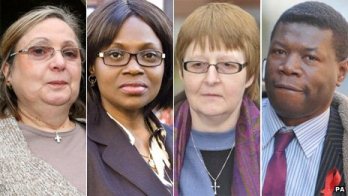 A British Airways employee suffered discrimination at work over her Christian beliefs, the European Court of Human Rights has ruled.

Judges ruled Nadia Eweida's rights had been violated under Article 9 of the European Convention on Human Rights.

She took her case to the European Court of Human Rights after BA made her stop wearing her white gold cross visibly.

Judges ruled that the rights of three other Christians had not been violated by their employers.

They had brought cases against the government for not protecting their rights but ministers, who contested the claims, argued that the rights of the employees were only protected in private.

Ms Eweida, 60, a Coptic Christian from Twickenham in south-west London, told the BBC she was "jumping with joy" after the ruling, adding that it had "not been an easy ride".

British Airways said its own uniform policy was changed in 2007 to allow Miss Eweida and others to "wear symbols of faith" and that she and other employees have been working under these arrangements for the last six years.

It said Ms Eweida did not attend work for a period of time in 2006 while an internal appeal was held into her refusal to remove her cross and she remains a British Airways employee.

Following the rulings, Prime Minister David Cameron said he was "delighted" that the "principle of wearing religious symbols at work has been upheld", adding that people "shouldn't suffer discrimination due to religious beliefs".

And the Archbishop of York said Christians and those of other faiths "should be free to wear the symbols of their own religion without discrimination".

The other cases involved nurse Shirley Chaplin, 57, whose employer also stopped her wearing necklaces with a cross, Gary McFarlane, 51 - a marriage counsellor fired after saying he might object to giving sex therapy advice to gay couples - and registrar Lillian Ladele, who was disciplined after she refused to conduct same-sex civil partnership ceremonies.

The four had made individual applications to the ECHR after losing separate employment tribunals but their cases were heard together.

They argued their employers' actions went against articles nine and 14 of the European Convention on Human Rights, which protected their rights to "freedom of thought, conscience and religion" and prohibited religious discrimination.

Ms Ladele was disciplined by Islington Council, in north London, after saying she did not want to conduct same-sex civil partnership ceremonies. Her lawyers said the service could have been performed by other employees who were prepared to carry them out

The Christian Institute said it was "disappointed" by the ruling, adding that it showed Christians with traditional beliefs about marriage were "at risk of being left out in the cold".

Mr McFarlane, a Bristol relationship counsellor, worked for the Avon branch of national charity Relate but was sacked for gross misconduct in 2008 after saying on a training course he might have an objection to discussing sexual problems with gay couples.

He told BBC News that the decision taken by European judges in his case was "a regrettable judgment" for all faiths, not just Christians, and said he would discuss his next move with his lawyers.

Ms Chaplin, from Exeter, was transferred to a desk job by Royal Devon and Exeter NHS Trust Hospital for failing to remove a confirmation crucifix on a small chain, which she had worn to work for 30 years. - BBC