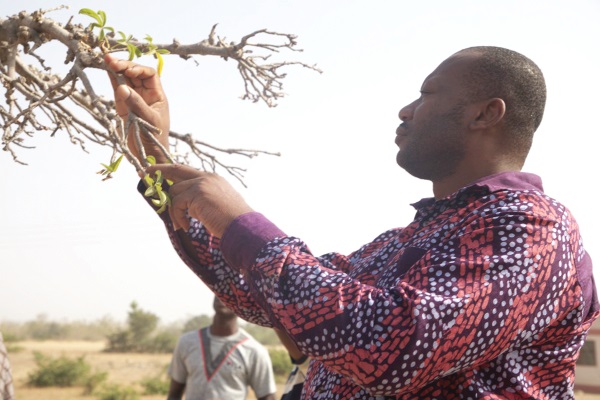 Indigenous and native trees preserve the unique landscape and give localities their unique vegetative character.

The tree species possess a lot of economic and medicinal benefits for communities, while also contributing significantly to addressing issues of climate change.

In northern Ghana, where these climate and weather resistant native trees are found, they are near extinction due to deforestation, which is adversely affecting communities and the ecosystem.

To address the situation, the West African Centre for Water, Irrigation and Sustainable Agriculture of the University for Development Studies (WACWISA-UDS), is working in some communities in the Northern, Upper East and Upper West regions to restore the depleted native trees and the ecosystem.

Through the Climate Resilience and Ecosystems Services (CRES) Project being funded by the Ministry of Foreign Affairs of Denmark, six native tree species, including Dawadawa, Marula, Baobab, Bombax Lanea and Jujube, are being planted across the beneficiary areas.

The project which started in 2021 and is expected to end in 2026, is being implemented in 15 communities in the Kumbungu District, Kassena-Nankana and Nandom municipalities.

Under the project, WACWISA is undertaking community-based tree planting and carbon certification of 20,000 trees from the six multi-purpose species, developing a new drone-based method for mapping, characterising and sampling these multi-purpose trees for domestication and management.

According to the Project Officer, Dr Dzigbodi Doke, so far, about 4,200 trees have been planted across the beneficiary communities out of the 20,000 expected to be planted by the end of the project in 2026.

About 1,000 community members are expected to benefit directly from the project and 5,000 indirectly.

The Project Lead and Director of WACWISA-UDS, Prof. Felix Kofi Abagale, in an interview with the Daily Graphic, said that the five-year project was aimed at increasing food and income diversity and climate change resilience of agricultural systems.

He indicated that the trees were adaptable and resilient to the localities that were selected for the implementation and were also very useful in their livelihoods and ecosystem balance.

He added: “The project will empower local women and youth in rural areas through value-added products of these species through capacity building.”

“In fact, we have observed that there are some trees that are adaptable to our environment, which have so many benefits to us, but these trees are gradually being destroyed.

“When I look around at all the baobab trees, I can confidently say that they are older than all of us, and the question is; if in our time we don’t have any baobab trees, then how will the future look like, what will those who will come after us depend on? So we are looking at how we can support the planting of these trees beyond the life of the farmer,” Prof. Abagale noted.

During a recent visit to some of the beneficiary communities, it was observed that the tree seedlings which were planted last year were doing very well.

For instance, in the Gizaa-Gundaa community in the Kumbungu District, the residents, particularly women, have embraced the project and have planted and nurtured the trees.

A leader of the community’s women group, Bamunu Peter, told the Daily Graphic that they had been educated on the benefits of the trees, for which reason they had embraced the project.

“We used to cut down those trees for firewood and charcoal because we didn’t know that they had many benefits, but now that we know, everybody is seriously planting and nurturing them on their farmlands,” she said.

For his part, the Chief of the area, Sabog-naa John Mahama Yakubu, described the project as timely, saying the community was currently feeling the direct impact of climate change, due to deforestation.

He noted that aside from restoring the environment, trees such as the Dawadawa and Baobab were also a source of food and nutrients for the locals.

He explained that "For instance the dawadawa fruits are used for cooking very nutritious food, while the waste water is also used for plastering our houses. Same can be said of the baobab leaves, which is used for soup, while flour is also extracted from the fruits for preparing porridge and even Tuo Zaafi.”