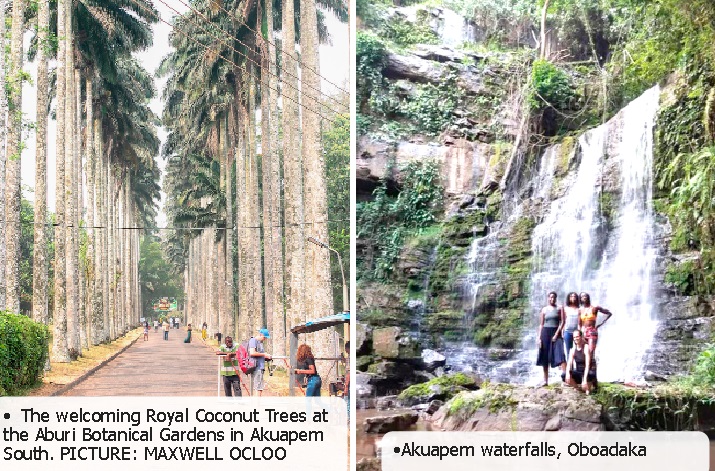 The constituency, located entirely within the Akuapem South municipality of the Eastern Region, is admired for its iconic cold weather, topography, historical monuments and ecotourism sites.

No wonder over the years, the Akuapem South Constituency has become the host for many people from the diaspora and the affluent in Ghanaian society.

Some of the big names with residence in the constituency include former President John Agyekum Kufuor, Bob Marley's wife, Rita Marley, and the Executive Chairman of Papaye Group, Dr Samir Kalmoni. The capital Aburi is about 20km from Accra.

The weather condition in the constituency is fairly cold with two rainfall seasons in a year.

It is generally categorised into two main zones (Akuapem-Togo Ranges and the Accra Plains).

The plains constitute a potential for irrigation and mechanised farming while the hills provide a good view of the Accra plains which is an attractive first-class residential area.

Despite hosting an affluent populace, the constituency had no bank for nearly five years, this is after GCB Bank shut down operations.

The constituency is rural in nature and problems of inadequate social infrastructure and amenities remain recurrent.

The team noticed household solid and liquid waste disposal was still a huge problem because the constituency has no final disposal sites for both liquid and solid wastes.

The team also noticed various ongoing projects such as Dome-Kitase Road Rehabilitation Project, the construction of teacher’s quarters at Aburi Girls SHS, a six-unit classroom block at Ayim, a five-storey school dormitory at PWCE and Kom Presbyterian Hospital, which is about 90 per cent complete.

The agricultural and tourism sectors are crucial to the local economy.

The constituency is an important national food basket involved in the cultivation of pineapple and citrus for both domestic and foreign markets.

It is endowed with some important national monuments and historical tourist sites which contribute over 60 per cent to the local economy.

These include the Peduase Lodge, a presidential lodge built by the first President, Dr Kwame Nkrumah.

Another facility that, when properly managed, could generate much revenue is the Aburi Botanical Gardens established by the Basel Missionaries in 1890. It receives about 35,000 visitors per annum.

The Aburi Craft Centre provides experienced wood carvers to produce various traditional artifacts and souvenirs, which are patronised by both indigenes and foreigners.

With 26 electoral areas, the constituency is a stronghold of the New Patriotic Party (NPP).

Since 1992, the constituency has produced four Members of Parliament (MPs) with Osei Bonsu Amoah who stood on the NPP’s ticket being the incumbent for the past 13 years (2009 till date).

With the late Magnus Opare Asamoah taking over between 2005 and 2008.

Akuapem South used to be known as the Aburi-Nsawam constituency until it was divided into Akuapem South and Nsawam Adoagyiri Constituencies in 2012. was elevated to the status of a municipality by Legislative Instrument (LI) 2396 in 2020.

The municipality (then a district) was carved out of the former Akuapem South Municipal, now Nsawam Adoagyiri Municipal on February 6, 2012, under LI 2040, Act (1742).

It shares boundaries with the Nsawam/Adoagyiri Municipal to the west, south-east by the Kpone — Katamanso District, to the south by the Ga-East Municipal and to north-east by the Akuapem North Municipal.

Its highest political and administrative body is the Akuapem South Municipal Assembly (ASMA).

Other economic potential sites for further development are the waterfalls at Boade near Nsakye and Mensaman, Pepawani, the natural rock bridge, with a stream running under it, and the Osei Tutu Shrine at Berekuso.

The rest are Oboadaka Rock, which resembles a coffin; the Obo-guanten, a rock with a design that looks like a carved sheep on it, near Kobiso; the Denkyembo, a natural rock shaped like a crocodile; and the recently opened Papaye Recreational Village at Konkonuru.

The constituency hosts a major part of the Adonten Division, which is headed by Aburihene Otoobour Djan Kwasi II.

Adonten is one of the five divisional areas within the Akuapem Traditional Area. The major festival celebrated by the constituents is the Odwira festival.

The MP, Mr Amoah, said the opportunity to represent the people of Akuapem South had been useful in several ways.

He explained that it had been a time of service, advocacy, contribution to democracy, promotion of development and growth, leadership and stability.

He said massive infrastructural development and major strides in the economic, energy, employment, education, health, tourism, water and sanitation and rural development sectors had been experienced during his 13-year tenure.

Specifically, there has been the provision of health facilities and equipment across the constituency, including the recently completed Kom Presbyterian Hospital.

The municipality has witnessed several road construction and rehabilitation within the past years. These include the $35 million Dome/Kwabenya-Brekuso-Kitase road, which links the capital, Accra, to the Eastern Region, Pakro-Nsawam road, Aburi-Adamrobe-Oyibi road and Nsakye-Pokuase road.

The feeder roads mostly link most of the communities to the municipal capital - Aburi.

There exist 110 basic schools, 68 being public schools and 42 privately owned.

In the tertiary level, there are the Ashesi University and Presbyterian Women's College of Education (PWCE).

The Municipal Chief Executive (MCE) of the ASMA, Frank Aidoo, said the strength of the constituency lies in two major identified development areas of comparative advantage.

He said these include the agricultural and tourism sectors of the economy.

Towards that, he said the plans of the assembly had been geared towards improving the two identified areas to trickle down development into other sectors.

The government has provided an assurance that the Aburi Gardens will be rehabilitated to attract local and international tourists for all the benefits to be derived from the sector.

A grant has been secured for the development of facilities at the waterfalls site- at Oboadaka to boost tourism while private investors have developed the Aburi Eco Resort at Aburi Amanfo.

Commending the government for various developmental projects in the area, the Aburihene said the Aburi Gardens with so much historical significance needed a facelift to a global standard.

He underlined the need for the government to urgently hand over the Aburi Botanical Gardens to the Aburi Traditional Council.

He said its demand for the botanical gardens was to save it from total collapse, as it was currently in a very deplorable state.