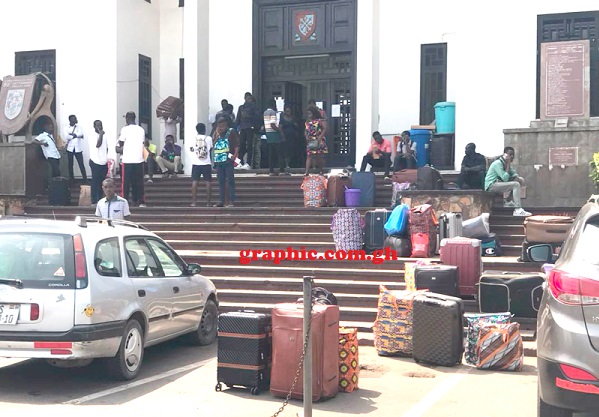 Students stranded at the Commonwealth Hall over accommodation
30.5k Shares

In 2007, the then Vice Chancellor, Professor Clifford Nii Boi Tagoe, of the University of Ghana (UG), Legon, in a story carried as the lead story on the front page of the Daily Graphic (May 29 edition), promised that the thorny accommodation problem on the university’s campus would be over in three years.

This was after the university secured a loan to provide a 7,100 bed facility to augment what the traditional halls usually provided.

Sixteen years on, in the year 2023, the problem still persists and may have even worsened as freshmen who have been offered admission have been left frustrated and perhaps, even regretting having chosen Ghana’s premier university.

After going through the admission processes, things have gotten to a head and officially, over 10,000 students are without accommodation.

In an interview with the Daily Graphic over the issue, the Pro Vice Chancellor of the university, in charge of Academic and Student Affairs, Professor Gordon A. Awandare, admitted that the problem had persisted over the years due to the inadequate accommodation space for the number of admitted students.

He explained that this year, for instance, the university admitted about 16,000 students while only 6,000 students could be accommodated.

He went on to say that the university was doing everything possible to remedy the situation, but unfortunately, it was faced with challenges such as inadequate financial resources.

“It is a problem that bothers us and we are working very hard to resolve it,” he said, and advised students to look for hostel accommodation outside the university campus.

While it may genuinely be a problem, given the increase in number of students seeking admission due to the Free Senior High School (SHS) policy, it is disappointing that the university has thrown its hands in despair as is suggested by the Pro Vice Chancellor.

Having experienced the relatively smooth process with regard to accommodation for my ward at the Kwame Nkrumah University of Science and Technology (KNUST), I resolved it will be the university of choice for other children simply because of how friendly it is for freshmen.

Unfortunately, my second child opted for UG and the past week has been a nightmare, trying to get accommodation.

Teaching them not to take advantage of ‘protocol’ but go through the regular channel, we have spent the last week being in queues, sometimes as early as 6:30a.m. to try our luck on hostels only to be disappointed as other students, driven to the school by their parents, sit and wait while the parents, on the ticket of protocol, get prompt response to their request for accommodation.

We gave up on the queues and tried our hands on the traditional halls accommodation, but the portal that opened at 9.a.m, barely lasted 20 minutes. In seconds, the feedback was either the available accommodation had been taken or the system just froze, denying us access to try again.

My child is not alone, but in our search for accommodation, we have encountered many other young freshmen, some of whom are to be on their own for the first time and are coming from other regions, stranded and confused as they also share similar experiences.

The situation has also created a huge room for some accommodation facility managers and other staff at some of the hostels on UG campus to exploit these frustrated and worried freshmen and their parents.

When the contact person asked if we were interested, I did a mental calculation: If we accept the offer, we will have to pay GH¢13,000 for just one academic year- first year- when most universities with proper planning take care of their freshmen.

UG must find a way of dealing with this issue before it begins having an impact on the mental health of particularly the young women who are more vulnerable.

If care is not taken, others may not only exploit the freshmen, but also take advantage of their vulnerability and abuse them sexually.

There is no doubt that because the problem persists and there is very little to resolve it, others, even staff who are paid to do their job, are cashing in and ripping innocent students off and adding to the tall list of the corruption index.

Having an opportunity to attend university is an exciting period for these young people, and they should not be made to feel that it is a punishment to choose, particularly, UG.