Papa soldier, not this path again

BY: The Mirror
Category: Features 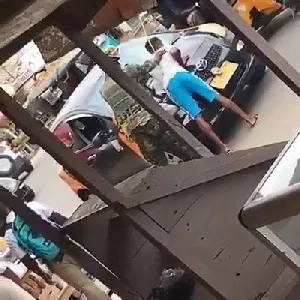 It was wrong for the soldier to lash the civilian
30.5k Shares

Last week, a video of a taxi driver being flogged by a soldier for failing to wear a face mask was one of the news items which trended on social media.

The video has since attracted all manner of comments, and for good reasons.

For some, in spite of the spike in COVID-19 cases and its attendant increase in deaths, it beats their imagination that people will be so irresponsible as not to wear their face masks to protect themselves and endanger the lives of others.

The protocols to stay safe have been hammered over and over again and it is the expectation of right-thinking members of society that we will frequently wash our hands with soap under running water, use hand sanitiser and observe some social distance.

To ensure compliance, a law, E.I 164 has been promulgated to take care of those who will flout the wearing of face masks in public.

The law criminalises the act of not wearing a face mask that fully covers the mouth and nose in public places.

This law states that those who are found guilty will be fined a minimum of GH¢12,000 or a maximum of GH¢60,000, or will be sentenced to between four and 10 years in prison.

It therefore grants the courts the authority to hand both a fine and a jail term to the offenders when considered necessary.

With this law, the police have been empowered to enforce the wearing of the masks by arresting citizens who do not comply and handing them over to the courts for a verdict.

A number of such arrests have already been made by the police in relation to this.

Why a soldier will side-step the punishment approved by our lawmakers and improvise his own is what The Mirror finds worrisome and untenable.

We find it unacceptable because the whole act brings a reminder of the country’s past, where soldiers, in the name of a revolution, entered markets and flogged traders, including women, whom they accused of different things such as selling above the controlled price.

In some cases, it was found that the whole punishment was carried out to settle personal scores.

We have gone through such and left it behind us as a nation.

We also believe that punishment much be standardised.

This is an unpalatable part of our history which we must prevent from recurring and must not be allowed to happen in a democratic country with laws.

The Mirror therefore calls for an investigation into this matter in order that the soldier in question is brought to book.

Failure to act on this will encourage others to take the laws of the land into their hands and the results will not bode well for us as a society.