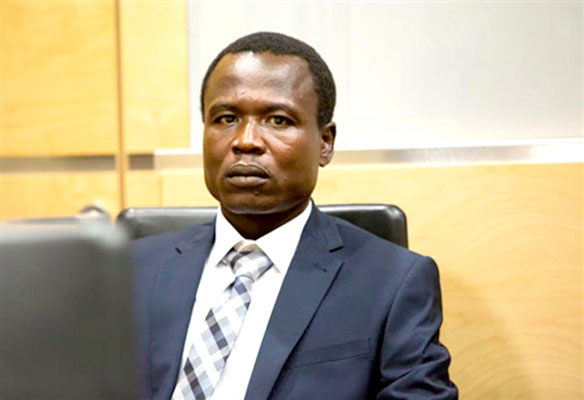 On Thursday, February 4, 2021, the International Criminal Court (ICC) in The Hague, Netherlands, in a landmark ruling, found Dominic Ongwen guilty on 61 of the 70 charges against him.

For most Ghanaians, this made no news, as Ongwen is not known here.

For me, however, the name and the ruling by the ICC brought back memories of one of my most difficult experiences.

Dominic Ongwen was an abducted child-soldier who became one of the top commanders of a guerilla group called the Lord’s Resistance Army (LRA), led by Joseph Kony.

Among other offences, Ongwen was found guilty of war crimes and crimes against humanity.

Between February 2008 and June 2009, I lived in Kampala, Uganda. I was the Senior Military Advisor to former President Joaquim Chissano of Mozambique, who was appointed in 2006 by the UN Secretary-General Mr Kofi Annan, as his (UN) Special Envoy for the Lord’s Resistance Army-Affected Areas.

Starting around 1986, the Lord’s-Resistance-Army led by a primary school dropout Joseph Kony, started a rather amorphous campaign to overthrow the Ugandan government and convert Uganda into a theocratic state, with him, Kony, as the head of state.

Taken for a joke, the LRA soon gained notoriety as a brutal organisation fighting the Ugandan government.

Its brutal forced recruitment was horrific and mainly targeted children under 12 for easy indoctrination.

Such boys, who were initially recruited from Kony’s home region of Northern Uganda, were forced to have sex with their sisters after which they were made to shoot dead their parents.

This was to ensure that they never thought of escaping back home from the Garamba Forest straddling DRC and South Sudan.

Those they left behind they mutilated by cutting off their noses, mouths, ears, fingers and limbs!

Once in Garamba, they were taught how to kill using scape-goats, who were accused of attempting to escape. In no time, they became killing machines.

During the trial, 45-year-old Ongwen’s lawyers argued that Ongwen himself was a victim abducted as a child into the LRA.

The prosecution, however, countered that while it was true that he was recruited as a child-soldier, Ongwen perfected the art of killing, which he enjoyed, so fast that he became the youngest of the top five LRA commanders.

I interviewed an escapee in Juba, South Sudan, in 2008. At 24, Henry had lived in the jungle since he was abducted at 12.

As part of preparations to reintegrate him into his home in Northern Uganda, I asked what his reaction would be if he was rejected.

Letting out a loud squeal, he leapt at me reaching for my oesophagus.

The good physical or social distancing I maintained during such interviews paid off, as I had seconds to jump back while he was restrained.

He then asked me, if adults could not protect him 12 years earlier from being abducted, why should they reject him for escaping back home?

He declared he would kill anyone who dared him. Obviously, he was more animal than human.

Since we operated in four countries, traveling of necessity had to be by air. On one occasion while speeding for a take-off, I heard an explosion followed by braking and screeching of tyres!

The pilot later joked that if he had not aborted the take-off, we would have ended up as lunch for the fish in Lake Victoria just at the end of the Entebbe runway.

At another time, while flying in a helicopter from the Garamba Forest to Juba in very bad weather through hilly terrain and over tall trees, we heard a loud noise.

To Mr President’s question “General, shall we make it?” I simply said “God willing, Sir!” When we landed in Juba about two hours later, President Chissano told me “General, God has willed!”

With moist eyes, we had a long embrace. The pilot confirmed the rotor missed the hillside by a few feet! Our bodies may never have been retrieved if we had crashed!

After so many years of hiding in the jungle, Dominic Ongwen has finally faced the law and been convicted.

Indeed, on February 5, 2021, a 95-year-old German lady was charged for her role in killings in concentration camps in WW2.

In Ghana, it appears the “let-the-blood-flow” mentality of 1979, which led to the executing of Generals, the murder of judges and the disappearance of over 200 Ghanaians, according to Amnesty International, persists in some heads!

Unfortunately, some who were not born then have adopted violence. Violence before, during, after the 2020 election attests to this.

Ongwen’s conviction should remind us that, violence does not pay. As Martin Luther King said, “The arm of the moral universe might be long, but it still bends towards justice!”

No matter how long it takes, wrongs will be righted, in some cases posthumously for the perpetrators, like Oliver Cromwell! Crime has no expiry date! So, let us live in peace as Ghanaians!
Fellow Ghanaians, wake up!