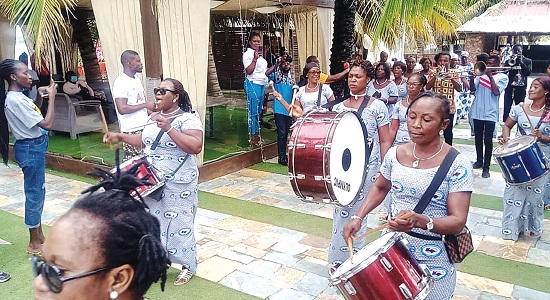 An all female band displaying at the launch of this year’s Asafotufi ami festival at Treasure Island in Ada. Picture: BENJAMIN XORNAM GLOVER Follow @Graphicgh

The Asafotufiami festival of the people of the Ada Traditional Area, made up of the Ada East and Ada West districts in the Greater Accra Region, is a rich cultural event celebrated annually in the first week of August.

It is mainly held in remembrance of the invaluable heroic achievements of the founding fathers and ancestors of the area, especially in the many wars of survival and development of Ada. The Dangme expression Asafotufiami simply means company or divisional firing of musketry.

Asafotufiami is essentially a war festival that commemorates the heroic achievements of the ancestors of Ada, some of whom bravely spilt their blood to save Ada from being overrun and destroyed by enemies in the colonial era.

Examples of such ancient wars and battles fought back in the days were the Battle of Nonobe – Ada-Anglo war in 1750, where Adas were supported by people in Akwapim, Akyem Abuakwa- Krobo and Agave to defeat the Anglos.

There was also the 1769 invasion by the British, for which the Ada emerged victorious.

Records indicate that in 1826, during the Katamanso War near Dodowa against attacks by Ashantis on coastal areas, the people of Ada were invited by King Tackie of Accra. The people of Ada responded to the call, and together with other allies, marched to Katamanso village near Dodowa to help defeat the Ashantis.

At the end of each war that the people fought, surviving warriors who returned home were met at the outskirts of the town by joyous townsmen and relatives and carried shoulder high to their respective homes amidst various merry making activities.

A day was, therefore, selected for a state welcome ceremony, featuring returnee warriors gorgeously dressed and decorated in war regalia, such as beads among other accessories, amid drumming and dancing and merrymaking.

It was climaxed with a march through the town to the Volta Riverside for a ritual of musketry firing into the river and general feet/hand washing to send away the evils of war and suffering.

The day ended with companies or divisions returning home amidst general jubilation. Warriors who fell at the battle had their due share of honourable mention in libation/ prayers and other mourning activities, especially by relations.

With the cessation of inter–tribal/ethnic wars and hostilities through the intervention of Europeans, especially the British Colonial Administration, the people of Ada now had no occasion to welcome back home warriors returning from battle.

They, therefore, decided to adopt and adapt the practice of ceremonial welcome of the returnee warriors of old into a yearly festival for all sons and daughters of the Ada State.

This ceremony was embraced and christened Asafotufiami festival, meaning divisional musketry firing festival, in commemoration of the wars, the fallen warriors and the survivors.

Speaking at the launch of the festival, the Mankralo of the Ada Traditional State and Chairman of the 2022 Asafotufiami festival Planning Committee, Nene Agudey Obichere, said the heroic traits and achievements of the forefathers in securing for them a homeland with all its endowments led to the establishment of the Asafotufiami festival to celebrate their sacrifices and to indicate to the current generation and those unborn to offer their lives as a sacrifice to others.

Outlining the activities for the festival, the Wetsoyi of the Lomobiawe Clan and Chairman for the Media and Publicity Committee, Nene Lomo IV, said they would include a homecoming ceremony for natives of the area from various parts of the country amid purification rituals in the various family houses by the elders.

This will be followed by a pilgrimage to some historical sites such as an old battlefield, called Aplenayer, amidst musketry fi ring, drumming, singing of war songs and dancing, under the leadership of their respective Asafoatseme, and at the riverside where the ancient warriors departed to war by boat and landed on their return. Libation will also be poured and musketry fired across the Volta River