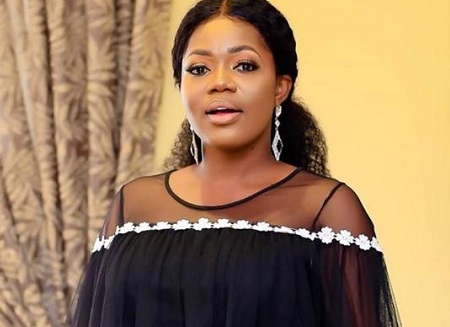 Hiplife artiste Mzbel has rendered an apology to former UT Bank boss Prince Kofi Amoabeng for always dragging his name into her controversies.

Mzbel and Mr Amoabeng dated some years ago and, was for years, rumoured to be the father of her son. Although they are no longer together, people still attach his name to her whenever she gets embroiled in any issues.

And on Saturday, October 10, when she appeared on UTV's United Showbiz, Mzbel said she was sorry for his name being dragged in the mud.

“I want to render an apology to Kofi Amoabeng for always dragging his name into any controversy that involves me. The man is innocent but it is quite unfortunate that anytime there is any issue about me his name comes up,” she said.

According to Mzbel, real name Belinda Nana Akua Amoah, her level of education is low but she has been able to learn a lot from Mr Amoabeng and he and his family did not deserve to be treated so badly.

Afia Schwarzenegger feud
On the show, Mzbel also addressed her ongoing feud with media personality Afia Schwarzenegger. The two, who used to be friends, have fallen out and since then they have traded barbs and put each other's secrets in the public domain.

The latest in their fight was last week where Afia Schwarzenegger made some allegations including claims that their friendship ended when Mzbel slept with her boyfriend which the artiste denied in a Facebook Live video.

Addressing the scandal on Saturday night, Mzbel disclosed that she had summoned Afia Schwarzenegger to the traditional court at James Town in Accra and they will handle the matter.

Read more: Mzbel yet to be charged after arrest - Lawyer

“At the slightest opportunity, Afia Schwarzenegger wants to tarnish my name. She slanders me on radio and even on her social media pages. I chose the traditional court because there you cannot lie because you will have to swear,” she said.

Mzbel also explained that the court will make Afia Schwarzenegger answer certain accusations she leveled against her and if she lies instant justice will be meted out to her.