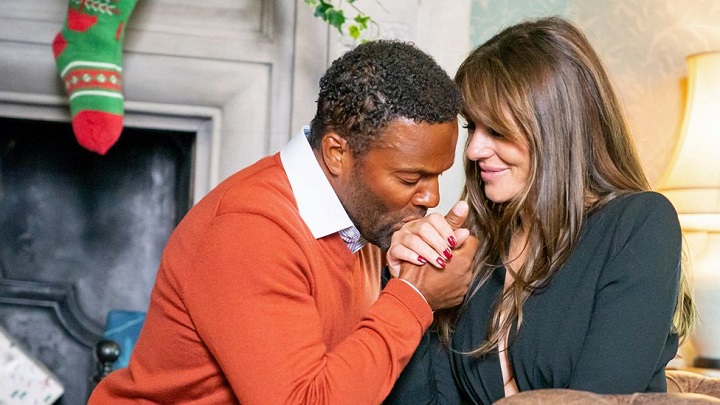 Settling down in front of feel-good festive movies has become a modern Christmas tradition - and has driven the production of seasonal films to record-breaking levels this year.

More than 200 new feature films and TV movies with the word Christmas in the title are listed on the Internet Movie Database (IMDB) for release in 2021.

Christmas movies have been popular for decades, and classics like Home Alone, Love Actually and It's A Wonderful Life will be widely watched again in the coming weeks.

But the boom in a new breed of festive films can be traced back to the Hallmark US cable channel's decision to launch a special season of TV movies in 2009.

This year, its countdown started even earlier, on 22 October, and includes a record 42 original holiday films.

"They bet really big on Christmas and everyone else seemed to notice the ratings," says Brandon Gray, co-host of the Deck the Hallmark podcast and one of the authors of a new book called I'll Be Home for Christmas Movies.

Rival channel Lifetime was among those to take notice and has made 35 of its own Christmas crowd-pleasers this year, also its highest number yet. 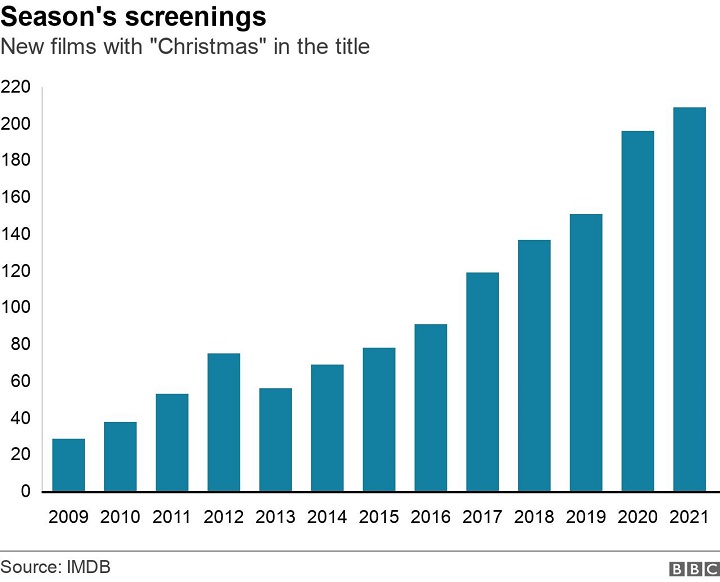 The IMDB numbers only include movies with "Christmas" in the title, meaning the true number of festive films is even higher.

When it comes to made-for-TV movies, many are relatively low-budget and use a feel-good formula to tell stories of romance and family - and are cosy and comforting enough to cancel out being corny and cheesy.

"It's this magical season when the storyline that's on the screen doesn't matter as long as there's a bunch of Christmas trees in the background and it's snowing," says Gray.

Hallmark built its festive empire on films that look and feel the same, Gray says.

"They have the same aesthetic because they figured out what works: 'If we keep everything basically uniform - not too funny, not too sad - people will go from one movie to the next.'

"So you have the two people that fall in love and there's some sort of misunderstanding with about 30 minutes to go and then they'll figure it out, and they'll kiss.

"And you do it over and over again, and as long as it looks uniform and feels uniform, people will watch one after the other."

This year is the best crop of films so far, Gray says - partly because channels like Hallmark are beginning to experiment with that formula.

"Especially this year, I feel the change, where they're putting more emphasis on different types of stories," he says. "They're working hard with inclusion and making sure that the stories that are being told match what you're seeing on the screen.

"So it's no longer them just putting a person of colour on screen in a white world, but they're actually telling stories that feel authentic to who you're watching on screen."

In the UK, some of those TV movies have been playing on the Great! Movies Christmas channel since 23 September, and on Channel 5 in the daytimes since early November.