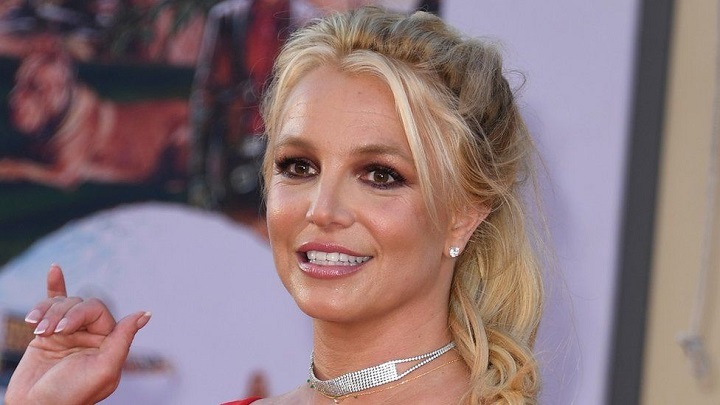 Spears said she had always been "judged, insulted, and embarrassed" by the media

Britney Spears has revealed she was brought to tears by the recent documentary about her life and conservatorship arrangements.

The singer said she did not watch Framing Britney Spears in its entirety but was upset by the parts she did see.

"I didn't watch the documentary, but from what I did see of it I was embarrassed by the light they put me in," the pop star wrote on Instagram.

The 39-year-old said she had "cried for two weeks" following its broadcast.

The post is her first direct comment on Framing Britney Spears, which focused on her life and mental health issues.

The statement was accompanied by a video of the singer dancing and playing air guitar to Aerosmith's hit Crazy.

"My life has always been very speculated... watched... and judged really my whole life !!!" Spears told her 29 million followers in a message posted on Tuesday.

"It takes a lot of strength to TRUST the universe with your real vulnerability cause I've always been so judged... insulted... and embarrassed by the media... and I still am till this day.

"As the world keeps on turning and life goes on we still remain so fragile and sensitive as people," she continued.

"I'm not here to be perfect ... perfect is boring," she concluded. "I'm here to pass on kindness."

The singer previously performed with Aerosmith's Steven Tyler in 2001

After watching parts of the documentary, Spears said: "I cried for two weeks and well... I still cry sometimes! I do what I can in my own spirituality with myself to try and keep my own joy, love and happiness."

Spears' life and business affairs have been controlled by a court-ordered conservatorship since 2008 following a dramatic public breakdown.

Earlier this month her lawyer formally asked a judge to permanently remove Spears' father Jamie from his role overseeing her personal affairs.

Samuel D Ingham III previously told the court Spears was scared of her father and would not be returning to the stage while he remained in control of her life.

Spears is requesting that Jodi Montgomery, a temporary conservator appointed in 2019, become her permanent personal conservator.

The legal documents also state that the chart-topping performer reserves the right to eventually request an end to the conservatorship.

Spears previously performed with Aerosmith as part of the Super Bowl halftime show in 2001 in Tampa, Florida.