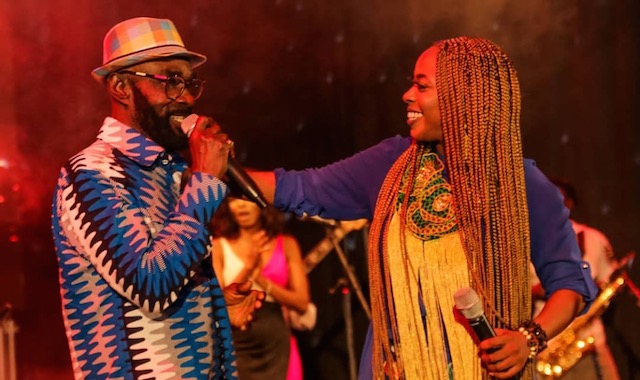 IT was a chance to record with an experienced, highly-rated older musician and singer/songwriter SSUE grabbed the opportunity with both hands when arrangements went through for her to step into the recording studio with Pat Thomas.

The result is Bome Nkomode, an invigorating piece about faith, self-discovery and enduring love. Written by SSUE, the lyrics initially grab the listener as just another love song but careful listening reveals a soul that finds strength, comfort and empowering love through an illuminating encounter.

What appears to be references to fleshly delights are actually a throwback to descriptions of physical beauty from the Songs of Solomon in the Bible. SSUE and Pat Thomas therefore hinge on lyrics that portray true, everlasting bonding in Bome Nkomode.

SSUE renders her verses in English while Pat Thomas does his in Fante. Both sing the choruses in Twi.

“It was fascinating and uplifting working with Pat Thomas. We shared ideas. We understood what sort of picture we wanted the lyrics to depict and we worked to do that.

"I’m happy it has come off nicely and we hope everyone who hears it loves it,” SSUE said about the track done with backing from the Ananse band.

An uptempo song in the Highlife vein, Bome Nkomode kicks off with a Yaa Amposah strain of guitar licks anchored on solid, steady percussion and bass before a delightful horn section of trombone, saxophone and trumpet burst in with their lines.

There are reminiscences of the Highlife dance bands of old that sold the genre to the world with their brilliant playing and arrangements.

SSUE and Pat Thomas have performed the track on a few occasions to live audiences, the last of which was in March this year at the Steel Pulse-headlined-show at the Grand Arena of the Accra International Conference Centre.

SSUE hit the music scene in mid-2018 and has since worked hard to establish herself as an ambitious, forward-looking young woman. She had a busy 2019 with performances in Ghana, South Africa and Nigeria.

She ended the year with two awards: Outstanding Afro Nu Soul Songstress at the 3-G Awards in New York in November and the Discovery of the Year honour at the Ghana Arts and Culture Awards in December.

The Bome Nkomode song was recorded live at the Black City Studios in Accra. It was produced by Scratch Studios Universal Entertainment. The song was mixed by Zapp Mallet and mastered by Kai Blankenberg of Skyline-Tonfabrik in Dusseldorf, Germany.

Bome Nkomode is due for formal release on July 1. It is worth listening to for an appreciation of what one of the hardest working young singers in this country is up to with one of the legends of highlife.