Sefa Kayi, Nana Aba, others are "See something, say something" ambassadors 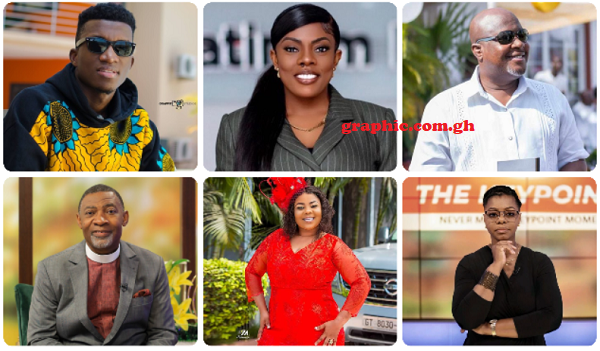 The Ministry of National Security has appointed some Ghanaian celebrities and media personalities as ambassadors of the "See something, say something" campaign.

The campaign encourages the public to be vigilant of the activities of suspicious characters and report such activities and characters to the security agencies.

The ambassadors were unveiled on May 24, 2022, at the launch of the campaign in Accra. They include: Kofi Kinaata, Kwame Sefa Kayi, Dzifa Bampoe, Gifty Adorye alias Empress Gifty, Nana Aba Anamoah and Rev. Dr Lawrence Tetteh.

Kinaata performed the "See something, say something" theme song at the launch (below) and has also tweeted with the #SeeSomethingSaySomething hashtag.

Kofi @KinaataGh on the “See Something, Say Something” security awareness campaign.

Watch till the end. pic.twitter.com/us52nGM9YP

The launch formed part of the ministry's border counter-terrorism strategy aimed at sensitising the public to terrorism threats and encouraging the citizenry to collaborate with state security agencies to reduce the threat of terrorism in the country.

As part of the campaign, a toll-free number — 999 — has been provided for citizens to swiftly report suspicious activities to state security authorities or use the emergency contacts and social media platforms of the Ghana Police Service to draw the attention of state agencies to unusual activities within their communities.

Where mobile connectivity is a challenge, locals are to report suspicious activities to their local police, traditional leaders, opinion leaders, heads of faith-based organisations and leaders of political parties who could expedite action to arrest any threat of terrorism attack situation.

It warned that these calls undermine the ability of law enforcement agencies to respond to actual crises effectively.

“Preliminary checks at the emergency call centres indicate that, in the first 30 hours following the launch of the campaign, over 10,000 calls have been made to the centre, of which the majority have been prank calls and calls to verify the operationality of the call line,” the ministry said.

This has led to “a development that has culminated in long call queues and delayed response to calls made to the centre,” it added.