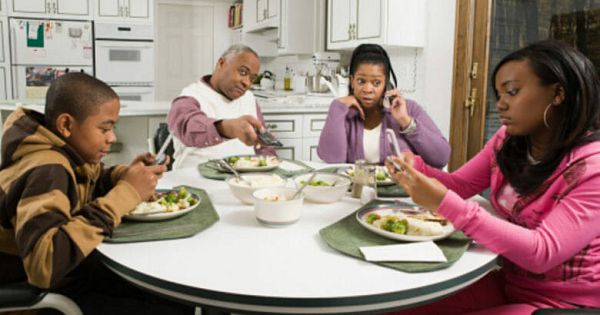 It is rare to spend time together without people getting on their phones Photo Credit: clickondetroit.com

A few years ago fighting over what television station to watch as a family was common in most Ghanaian homes; mothers, fathers and their children had to compromise on what TV programme the family could watch together.

In most cases, although the fathers, the head of the family ‘won’ the TV battle, all other members had no choice but to stay together and watch the particular programme as there were no other sources of entertainment.
Many years before that, when television was not common in many homes, family members after the day’s work gathered and recounted how the day went or listened to stories from the elderly.
These gatherings created a bond among family members and allowed them to interact and be updated on each other’s activities.
Today, interactions between family members have completely changed; most homes have televisions now but there is hardly a fight over remote control or what station to watch and as for storytelling at night, only a few people remember those days.
These days, almost all members of the family have smartphones (including children under 12 years) which allows them to communicate with people near and far.
There are many internet applications, social media sites, websites and blogs that provide a variety of information and entertainment for people of all ages.
According to the Head of Management Information System at the Controller and Accountant General’s Department, Mr Allen Provencial, parenting has become difficult because children prefer to access information or take instructions on the Internet than listening to parents.
Also most young people know their way around smartphones and computers more than their parents and so parents have little or no control on what they (children) do on the Internet.
He said although technology had made life at home easier, it was important to share some quality time with the family as there was some gap in physical bonding among relations compared to previous generations.
“Today’s reality is that even when parents pretend to play with children or share some family moments, the emails from work and conversation on social media platforms are taking half of their attention.
It is important to switch off your devices for at least an hour or two when at home and spend some quality time together. The habit of bringing work home is one of the main reasons for many failing relationships as this compromises time for intimacy,” he noted.
Mr Provencial said it was necessary for parents to take an interest in what their children did on these devices and on the Internet.
Unplug from digital devices
An Information Technology Expert and the Owner of Ghmovie Freak Website, a popular film review website, Mr Tony Ovisu, said currently the most widely used technology among family members was instant messaging applications such as WhatsApp on mobile phones
He said most families had WhatsApp platforms where family interactions took place and important information relayed.
He stated that it was necessary for family members to learn to unplug from their digital devices occasionally to bond and communicate physically to facilitate face-to-face interaction to help strengthen family ties.
“The situation prevailing currently in almost every household is that, if there are four members, each of them will have a personal screen with which they spend most of the time.
“When parents and children come back after office and school at the end of the day, it is important to interact with each other. It helps maintain a personal bond and fosters empathy for the apprehensions of the other,” he explained.