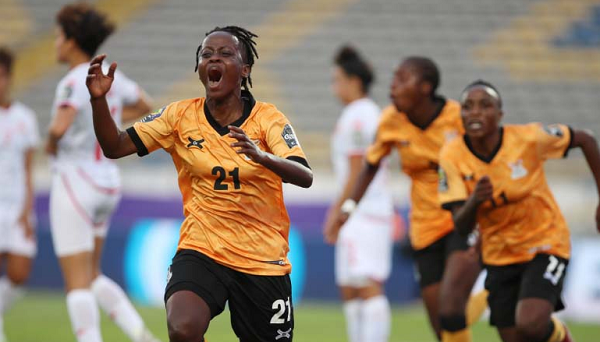 Though both have qualified for next year’s Women’s World Cup (WWC), South Africa and Zambia have scores to settle as they clash in the first semi-finals of the ongoing Women’s Africa Cup of Nations (WAFCON) in Casablanca.

It is the first time two teams from Southern Africa are clashing in the semi-finals, thus setting up a regional derby at this competition.

Interestingly, their paths have not crossed that much even at their sub regional level, the Confederation of Southern African Football Associations (COSAFA) but the few times they have met, have been tough.

Of the two sides, the Bayana Bayana of South Africa are the more glamourous side with 12 WAFCON appearances since making their debut at the inaugural competition in 1998 and have finished as runners up on four occasions (2000, 2008, 2012 and 2018).

They have had a topsy turvy history in the WAFCON but in the last seven years, they have made a deliberate effort at maintaining an improved form.

The decision to hand the team to former captain, Desiree Ellis in 2015 and sticking with her by providing her with all the support and logistics have paid off as since that time, the team have finished fourth (2016), second (2018) and have qualified for their second successive WWC (2019, 2023).

In Morocco, they have maintained their consistent form, not dropping a point and beating all that they have encountered, including defending champions, Nigeria 2-1 in their Group C opening game. It was indeed, the third time they have won against the Super Falcons, a result, they believe is proof of their consistency now.

While their star player, Thembi Kgatlana, the topscorer and best player at the 2018 was expected to continue from where she left off at the last tournament, injury robbed her of that chance and her side’s the advantage of having her in action, thus they have had to turn to Jermaine Seoposenwe Hildah Magia and Linda Mothalo to carry their dreams of the team.

These have not been as outstanding as Kgatlana has been, but they have done the needful by getting the results that have propelled them to this point by beating Nigeria (2-1), Burundi (3-1) and Botswana (1-0) at the group stage before dismissing Tunisia (1-0) in the quarter-finals.

Against Zambia, they will be out to maintain their dominance as the queens of the sub region, including beating the Shepolopolo in 2018 to win the COSAFA tournament.

However, the Zambians have managed to also show some consistent form, beating the South Africans in their 2021 COSAFA clash.

After a 1-1 draw, the Shepolopolo beat Bayana Bayana 4-3 on penalties to finish third at the 2021 COSAFA tournament which was surprisingly won by Tanzania in South Africa. This was seen as a positive sign for the Zambians who had made their debut at the 2020 Olympic Games in Tokyo and had returned with some impressive outing despite exiting at the group stage.

In their third WAFCON, the Zambians are in the semi-finals after topping Group B which had Cameroun (0-0), Tunisia (1-0) and Togo (4-1) before beating Senegal on penalties after a 1-1 draw in 120 minutes.

Having survived, the Shepolopolo, relying on a local coach, Bruce Mwape, would be out to build on that as well as they head to their first WWC, only that they will have to find a way of dealing with their Southern African neighbours, runners up in 2018, and who believe they have an unfinished business of lifting the WAFCON title for the first time.

With history beckoning either side, the Zambians keen to make history by playing in their first WAFCON final and the South Africans, eager to be in their second successive final and another chance to attempt to lift the trophy, this semi-final clash will be more than just a COSAFA challenge, but one defined by the grit, determination and superior tactical plan aimed at being queens of Africa.