Women’s AFCON 2022 : Can Morocco roar Nigeria out of WAFCON history? 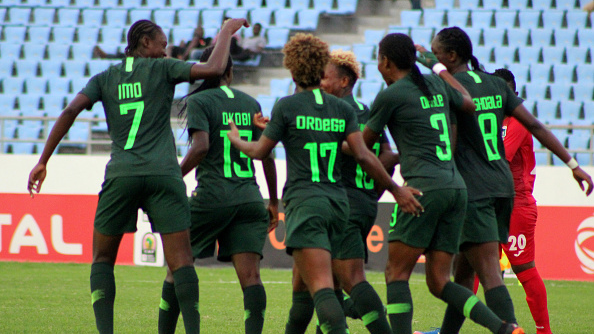 Tonight at the Prince Abdellah Moulay Stadium in Rabat, they will set out to roar louder as they attempt to bring down the Super Falcons of Nigeria in their David and Goliath semi-final encounter.

While the Big Mamas of the tournament and nine times champions, Nigeria are keen on clinching their 11th final berth and in the end lift the trophy for the 10th time, Morocco, are hoping they can be the giant killers.

Even if they lose this encounter, the Atlas Lionesses of Morocco would have made history as the first from North Africa to claim a place in the final four and also advance to the Women’s World Cup.

However, that may not be enough compensation for the Moroccans, who have invested heavily in developing their women’s game, committing resources in both the organisation and technical support to considerably improve the level of their game.

For Nigeria, it will be business as usual as they also have their sights on maintaining the statusquo and the standards they have set since 1998 when they claimed their first WAFCON title and have kept improving that record.

Coincidentally, in that 1998 venture, Morocco were among the victims that fell to the Super Falcons on their lifting the title, trounced 8-0 in their opening Group A encounter.

That remains the only time the two sides have had their paths crossed but in this second meeting, the story of an easy conquest may not be the same.

Since that 1998 clash, the Nigerians have gone on to win many more WAFCON titles, while the Moroccans struggled to even qualify, but then they managed to turn things around as they made a deliberate effort at improving things, including the hiring of a French coach, Reynald Pedros to change the narrative for the team that have struggled to claim their place among Africa’s best since making their debut.

Pedros, a former French international and coach of the Lyon women’s side, has managed to shape the Lionesses into a winsome side, committing the last year and a half into building and preparing them for the WAFCON.

Having reached this far, the fourth team to host the tournament and reach the semi-finals, they believe they have what it takes to go all the way, thus will leave nothing to chance, including getting the 53,000 capacity stadium filled up with their supporters to cheer them on to this giant-conquering ambitions.

Given that Equatorial Guinea were successful at it in 2008 and 2012, the only times the Nigerians have lost, at this level, Morocco will draw inspiration from that as they try to end their opponents’ dominance, even if temporarily.

That will be a herculean task, given the stature of the Super Falcons, incidentally, the other side with a foreign coach, as they also have an American, Randy Waldrum leading.

Also a former player and one with the experience of coaching women football teams at the college level and also Trinidad and Tobago, Coach Waldrum has led his side to make steady progress since taking charge in 2020 and will be looking forward to being the fourth expatriate to lead the Nigerians to another WAFCON title.

Road to the semi-finals

Morocco began their campaign from Group A and were one of two sides that advanced with nine points having beaten Burkina Faso (1-0), Uganda (1-3) and Senegal (1-0).

In the quarter-finals, they beat first timers, Botswana 2-1 and have their star player, Ghizlane Chebbak contending for the top scorer award with three goals.
Nigeria, on the other hand, lost their opening game 1-2 to South Africa, but recovered and beat Bostwana (2-0) and Burundi (4-0) in their remaining Group C games to advance. In the quarter-finals, they edged out rivals, Cameroun in what was billed as a final before the final.

With their star striker, Asisat Oshoala out as a result of injury, Rashedat Ajibade has stepped up to play that role and has scored three goals in four games to be in contention for the topscorer accolade.

Comparatively though, Nigeria have more quality and experience than the Moroccans and that may make the difference in this clash. The Atlas Lionesses are a more youthful side, have speed and like playing a high-pressing game right from the start, usually trying to take an early lead as seen in their games so far at this competition.

However, they lack the killer punches to convert the chances they create and that may be their undoing as they come up against an experienced Nigerian defence that seem to be getting better after their initial slip up against South Africa.

The Falcons are mistresses of plotting their semi-finals win no matter the opponent, and unless something happens or the referee to be appointed has a bad day, the Moroccans may be left disappointed.

The first North African side to play in the final and perhaps, the third to host and win the tournament after Nigeria and Equatorial Guinea.