Neymar to earn £3,200 an hour in wages as part of mammoth PSG deal

Neymar is set to leave Barcelona for Paris Saint-Germain for a world-record fee of £198million.

It is a deal which will smash the transfer record set 12 months ago when Paul Pogba returned to Manchester United from Juventus for £89m.

The Brazilian is expected to cost PSG in the region of £450m over the course of the five-year contract widely reported to have already been agreed.

Using the pound sterling conversion, the former Santos man will take home a yearly salary of almost £28m, which translates as just shy of £2.5m per month.

Here's a breakdown of Neymar's salary once he completes his record-smashing move to Paris... 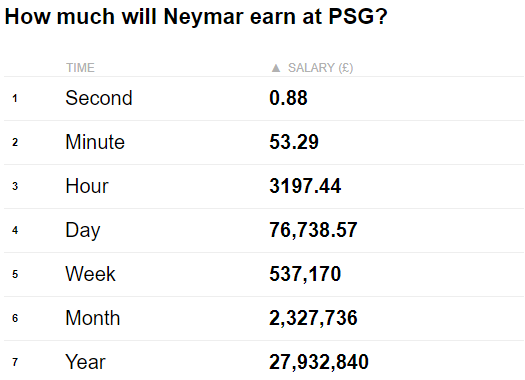