Living her dream at the FIFA World Cup... Dora’s moment of glory in Qatar 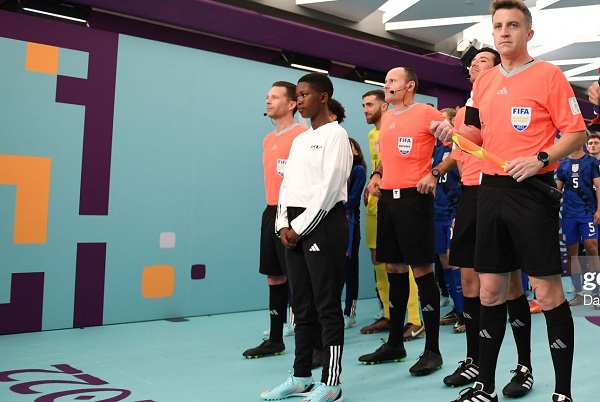 Growing up, Dora Nyarkoh always dreamt of becoming a football star. Her goal was to be a national player and play professional football for Chelsea Ladies in England. Like many youngsters, playing football in her neighbourhood and in school were baby steps necessary for nurturing her talent as she works her way up in school and her dream career.

However, hardly did the 13-year-old expect to hit the global stage even before catching the eye of the national team selectors. Making it to Chelsea Ladies was a long way ahead.

Last week, under the bright lights of the Al-Thumama Stadium in the Al Thumama district of Doha, the

capital of Qatar, Dora took significant steps into history and the world’s attention as she carried the official match ball for the 2022 FIFA World Cup Group B clash between USA and Iran.

The match was significant for sporting and geo-political reasons, but for the young girl from Cape Coast, it was a dream come true and a historic feat as the first Ghanaian privileged to be selected by automobile giants and FIFA partner, KIA, among 64 children across the world as Official Match Ball Carriers (OMBC) for the competition. 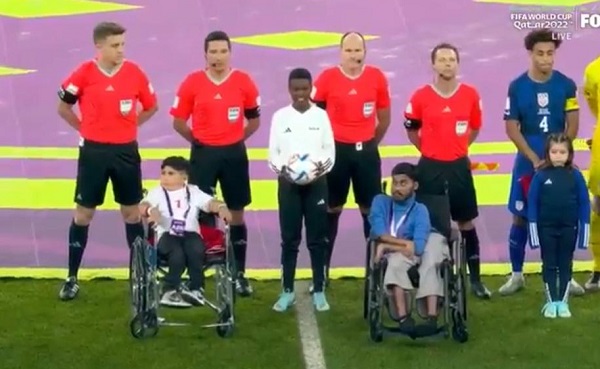 Each of the 64 OMBCs, aged between 10 and 13 years, were schoolchildren chosen based on clear criteria, including having inspiring stories. And through Rana Motors Limited, authorised sole agents of KIA automobiles in Ghana, Dora was chosen by officials of the Ghana Football Association (GFA) from a field of 26 children from across the country.

As the first Ghanaian to get that privilege, Dora was beside herself with joy after fulfilling that once-in-a-lifetime role even though she naturally felt nervous standing by international stars and entering into a huge stadium filled with 42,127 spectators in attendance and watched by hundreds of millions of global television viewers.

From the moment she led the two teams and referee Antonio Mateu Lahoz from the tunnel and picked the match ball onto the field to line up for the national anthems, Dora’s face was in focus on live television and in homes across the world. It was a very prominent setting far from her humble life back home. 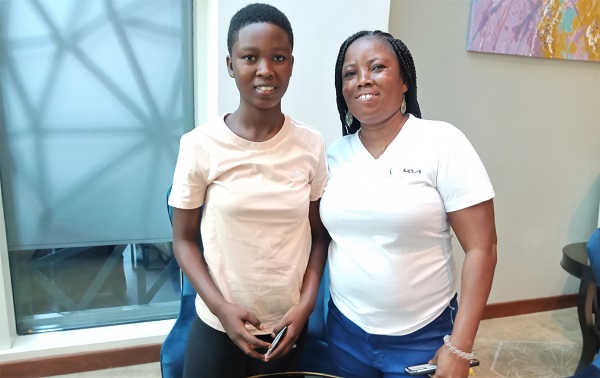 Droa Nyarkoh and her proud mother, Vivian, at their hotel in Doha

For her, the journey from Cape Coast to Doha had changed her life significantly, more than she ever dreamt of, or imagined.

It was an experience the Form One business student of Aburaman Senior High School will never forget and one she says has made her appreciate that God has a plan for every child, irrespective of the person’s background.

Significantly, as the captain of her school football team and a player of Ali Royal Ladies FC in Cape Coast, the World Cup experience, and the comfort laid out by KIA for her in Qatar, has strengthened her resolve to work harder to fulfil her dreams in life and football.

“Everything about me was to get far in football. My plan was to focus, train hard and fulfil my ambition to play for the Black Princesses (national U-20 female team) and Chelsea Ladies.
"This has changed everything I do because I wasn’t thinking of being the first OMBC from Ghana, but today I know that I can also make it to the top after standing next to football stars from across the world,” Dora told the Daily Graphic with a childlike grin.

Today, not only did she get the opportunity to travel by plane for the first time with her mother, as well as being lavished and lodging at the luxurious Intercontinental Doha Hotel, she is already a star and a role model among her peers.

It was also a surreal experience for her mother, Vivian Nyarkoh, who is still processing the turn of events in the life of her only child she supports single-handedly.
“I feel very happy and I thank God for this glorious opportunity given to my daughter. I feel proud as a mother,” she said the morning after Dora’s moment of glory.