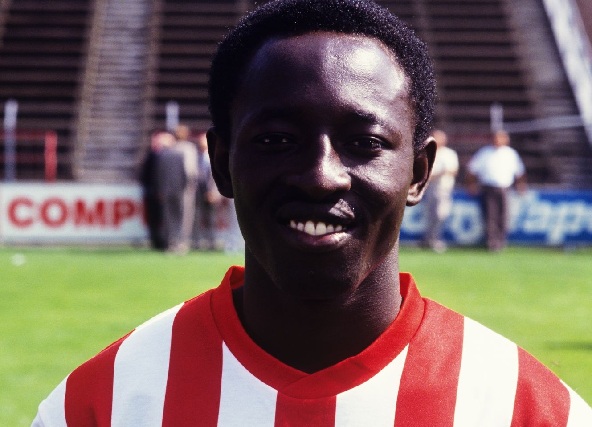 Twenty-two years after retiring from active football, former Black Stars and Asante Kotoko striker, Prince Opoku Polley, has revealed that his father’s playmate, Malik Jabir, unearthed and nurtured his potentials to become one of the best strikers in his generation.

Describing Malik as a very smart, intelligent and courageous coach during an exclusive interview with Daily Graphic,  Polley said without Malik, he (Polley) would not have had the confidence to play at the highest level in Ghana, Africa and Europe.

“Malik succeeded in bringing out all the hidden qualities in me and turned me into a potent striker when I started playing for Kotoko as a teenager.

“He sometimes took some risky decisions and stuck with it. One of such decisions was selecting me to play in the first team during the second leg of the Kotoko-Zamalek CAFChampions League second leg quarter-finals match at the Baba Yara Stadium in Kumasi in 1987,” he recalled.

According to him, at the time Malik opted for him to play ahead of Saarah Mensah, who was a seasoned striker then, he (Polley) was an unsung player who had never played at the highest level of football.

“Perhaps, he realised that I had hidden qualities which needed to be unearthed, hence his decision to include me in the first team in a crucial match at a venue with one of the most vociferous supporters in Africa”, he noted.

Polley, who played for Kotoko between 1984 and 1988 before leaving for Holland to play professional football, said during the Kotoko-Zamalek match, he scored a brace to help the Porcupine Warriors  to thrash Zamalek 5-1 and qualify for the semi-finals of the competition.

“Using me instead of a seasoned player such as Saarah Mensah was a big risk he took but he stood by it and eventually it paid off.

“By using me in my maiden continental match, he (Malik) put his job on the line, especially considering what the supporters of Kotoko would have done if the club had lost the match.

“After the match, my confidence level started soaring very high and I never looked back,“ he revealed.

“Malik gave me the opportunity to explore my career to the fullest in a big team like Kotoko and this made it possible for me to play competitively for the Black Stars and as a professional footballer in Europe,” he stressed.
.