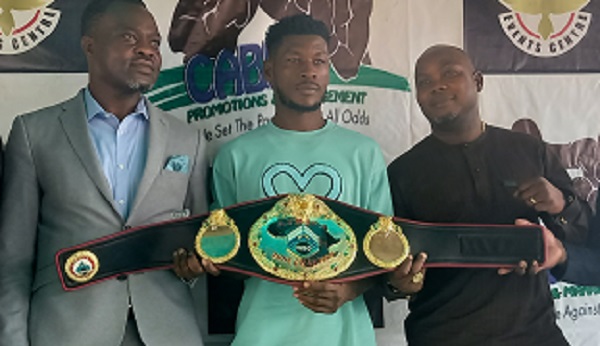 Former WBO Africa Super welterweight champion, Patrick Allotey says he decided to fight to reclaim the title as part of a grand plan to work his way up towards a world title shot.

Allotey, 31, has not fought since defeating Victus Kemavor in a non-title fight at the Idrowhyt Event Centre at Dansoman in December 2020 but maintains that he can bounce back strongly and win the world title this time.

More than 15 months since that second round technical knockout victory over Kemavor, Allotey returns to the same venue to fight Hamisi Maya of Tanzania on March 26 for the vacant WBO Africa super welterweight title.

At a press briefing in Accra yesterday to officially announce the upcoming Cabic Big Fight by Cabic Promotions, 31-year-old Allotey says next week's showdown is an opportune moment to re-launch his career, which was jolted after he was banned for six months following an assault on a fan during a football match at the Accra stadium.

The boxer further stated that, despite 15 months of inactivity as a result of the ban imposed on him two years ago by the Ghana Boxing Authority, he had been training regularly and was in shape to re-launch his career.

Other fights on the night will see Emmanuel Quaye up against Frank Dodzie in the West African Boxing Union (WABU) Super welterweight championship, while Haruna Osuma of Ghana clashes with John Martin Cyril of Nigeria for the WABU heavyweight title.