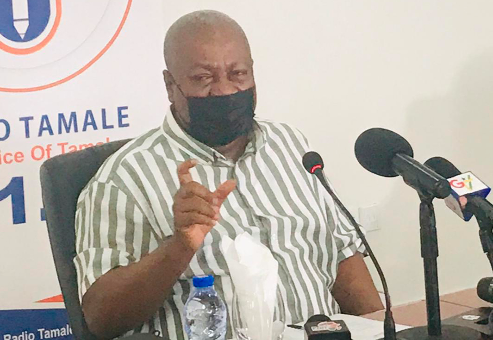 Former President John Dramani Mahama has called on the government to resource the Office of the Special Prosecutor (OSP) to investigate issues of corruption across the board.

According to him, the first Special Prosecutor (SP), Mr Martin Amidu did not get the kind of cooperation he needed to do his job.

He said it was imperative that the government ensured that the new SP, Mr Kissi Agyebeng, had all the necessary support, cooperation and resources to do his job and assert his independence.

“We heard of Martin Amidu’s complaint about lack of funding in terms of logistics, finance to recruit the personnel he needed to do the job, the Executive had also attempted to interfere in his job, leading to his resignation and I hope Mr Kissi Agyebeng, the young and brilliant lawyer will be given the needed support and cooperation to fight corruption across the board in the country”, he stated.

Mr Mahama made the call in an interaction with the media during his ‘Thank You’ to the Northern Region last Thursday, to thank the chiefs and people of the region for their support for him and his National Democratic Congress (NDC) in the 2020 general election.

The former President, who was the Presidential Candidate of the party for the 2020 general election, was accompanied by his running mate, Prof. Naana Jane Opoku-Agyemang, Mr Julius Debrah, a former Chief of Staff, Mr Joshua Alabi, the 2020 campaign manager of the NDC, Mr Joshua Akamba, the National Organiser of the NDC and some party functionaries.

The former President said the NDC government, under his leadership, fought corruption better than what the current government was doing, saying that during his term, members of his own party who were found culpable in the Ghana Youth Entrepreneurship and Employment Development Agency, (GYEEDA) scandal were prosecuted, while other ministers engaged in wrong doings were made to resign.

Mr Mahama stated that what would cure the recent labour agitations in the country was to replace the Article 71 officeholders’ emoluments structure with a uniform public sector pay package.

He recalled that during its electioneering in 2020, the NDC promised to replace the Article 71 officeholders’ emoluments structure with a uniform public sector pay package.