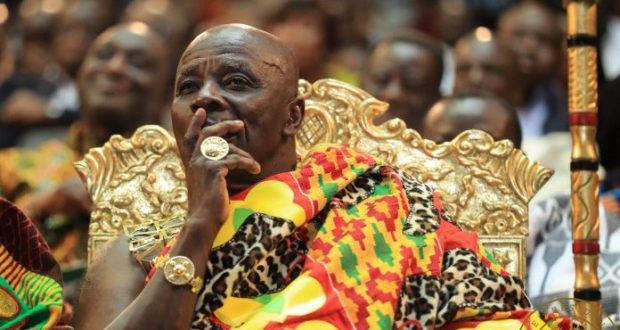 The Okyenhene, Osagyefuo Amoatia Ofori Panin has responded to concerns raised by the Omanhene of the New Juaben Traditional Area, Daasebre Professor (Emeritus) Oti Boateng over the composition of the re-structured Eastern Regional House of Chiefs (ERHC).

Lawyers for the Okyenhene, led by one Kwame A Boateng, said to be the Head of The Ofori Panin Fie Legal Team, have in a letter told Daasebre Oti Boateng that his concerns to the National House of Chiefs, including claims that there was a "capricious determination and selection of Divisional Chiefs, amongst various paramountcies" in the region, were unfounded and ill-informed as a result of his failure to attend meetings for about seven years.

"We are not surprised by your lack of knowledge of these important matters of fact, because, indeed, you have failed or refused to attend meetings of the Regional House of Chiefs for the past seven (7) years (although your allowances for attendance is unfailingly paid and received). Your failure to either attend meetings of the ERHC for the past 7 years or conduct an enquiry on the issues raised in your letters explains the wild but unfounded allegations contained in your letters", said the response by the team of lawyers representing the Okyenhene.

Below is the letter in full

Dear Nana,
RE: PROTESTATION AGAINST THE COMPOSITION OF THE RE-STRUCTURED EASTERN REGIONAL HOUSE OF CHIEFS

We communicate as the Solicitors for HM Osagyefuo Amoatia Ofori Panin with instructions to respond to your letters dated 25th June, 2020 and 14th July, 2020 on the above subject, addressed to the President of the National House of Chiefs and copied to our client and other prominent persons in Ghana.

Firstly, our client take note of the generally acerbic and vitriolic tone of language as well as the contemptuous imputations contained in your letters which are directed at him although addressed to the President of National House of Chief (NHC). Whilst observing that such language is inappropriate and unbefitting of communication between esteemed members of the august House of Chiefs, in the spirit of fostering harmony, accord and unity among noble brothers, we have been instructed to refrain from replying in similar tone.

The purpose of this rejoinder is to place on record a response to the unfortunate and, perhaps, deliberate misrepresentation by you of the circumstances culminating in the amendment to the composition of the Eastern Regional House of Chiefs (ERHC) in your letter, contents of which have been published widely in both print and electronic media.

Before proceeding to address these allegations, it is pertinent to indicate that your letter was clearly written in ignorance of relevant facts affecting the subject you purported to write about. The composition of all Regional Houses of Chiefs, including the ERHC, have duly been effected in accordance with the procedure prescribed by article 274(2) of the Constitution and section 6 of the Chieftaincy Act, 2008 (Act 759). Article 274(2) of the Constitution stipulates that a “Regional House of Chief shall consist of such members as Parliament may, by law, determine”. Further to this provision, section 6 of Act 759 provides thus:

Further, it is apparent that at the time you wrote your second letter in which more vitriol was unleashed on our Client and the august House (14th July, 2020) the legislative instrument regulating the membership of all Regional Houses of Chiefs issued under the signature of the President of the National House of Chiefs had long been laid in Parliament and going through processes required under article 11(7) of the Constitution.

We are not surprised by your lack of knowledge of these important matters of fact, because, indeed, you have failed or refused to attend meetings of the Regional House of Chiefs for the past seven (7) years (although your allowances for attendance is unfailingly paid and received). Your failure to either attend meetings of the ERHC for the past 7 years or conduct an enquiry on the issues raised in your letters explains the wild but unfounded allegations contained in your letters.

A brief background to the decision by the ERHC to admit some divisional chiefs to the ERHC is necessary to clarify the procedure adopted. Prior to the entry into force of the new legislative instrument, the ERHC was composed of only eleven paramountcies – Akyem Abuakwa, Akyem Bosome, Akyem Kotoku, Akwamu, Akwapim, Kwahu, New Juaben, Yilo Krobo, Manya Krobo, Boso and Anum. Only eight (8) of these paramountcies presently have paramount chiefs. Out of the 8 paramount chiefs, chieftaincy disputes and other factors have effectively ensured that only five (5) paramount chiefs have been active in the ERHC for the past 7 to 8 years i.e.

In fact, attendance records will show that you have not attended any meeting of the ERHC for over 7 years.

Indeed, the ERHC, even though representing a region by no means the smallest, had, by far, the lowest number of chiefs. In a variety of ways, this situation severely impacted on the constitutional and statutory functions of the House, as well as, its prominence in chieftaincy affairs at the national level.

Foremost, the ability to meet as a House and the discharge of one of its most important fundamental tasks, the resolution of chieftaincy disputes, suffered enormous strain. The 5 active members of the House listed above (which excludes your good self), became the de facto members of almost every committee, particularly, the Judicial Committee. The absence or unwellness of some of the members rendered a sitting virtually impossible for lack of quorum. A chieftaincy dispute emanating from any of the “active Paramountcies” became near impossible to resolve as the Paramount Chief concerned had to recuse himself from the Judicial Committee, with its attendant challenge of forming a quorum.

Further, at the national level, the representation of the ERHC at the National House of Chiefs was affected with other regions having the flexibility to choose from a greater “pool” of chiefs to represent their Regions.

In light of the foregoing, discussions were opened among stakeholder institutions - the National House of Chiefs, ERHC and the Ministry of Chieftaincy and Religious Affairs on the mechanism to address the problems identified above. Series of meetings commencing from May, 2019 and culminating in the one of 25th May, 2020 alluded to in your letter (which was attended by the full complement of active members), were held by the ERHC to deliberate on the issue. We are not surprised about your seeming obliviousness of these meetings since, as indicated, you have not been attending meetings for over 7 years, in spite of due service of notice on you.

Your failure or refusal to attend meetings notwithstanding, the Hon. Minister for Chieftaincy and Religious Affairs, Mr. Kofi Dzamesi requested to pay homage to you and explain the all-encompassing need to reform the composition of the ERHC, and request you to nominate divisional chiefs from the New Juaben Traditional Area to the ERHC. Your response to the Hon. Minister on the subject matter of discussions was reported to the House. In the spirit of preservation of amity and cordiality of relations among chiefs in the Eastern Region, we would keep most of the points made by you confidential, save to say that you stiffly opposed the idea of Divisional Chiefs sitting in the ERHC.

Be that as it may, the National House of Chiefs proceeded to make suggestions on the proposed reform resulting in the inequitable decision to grant unto you the right to nominate as many as six (6) divisional chiefs from the New Juaben Traditional Area for representation at the ERHC and same found its way into the new L.I. 227, thereby becoming law. It is quite apparent that your allegation of an “exclusion of New Juaben” from the paramountcies from which Divisional Chiefs will be nominated to the ERHC is hugely false and mischievous. No Traditional Area in Eastern Region has been excluded. On the contrary, every Traditional Area in Eastern Region has been accorded the right to nominate Divisional Chiefs for the purpose of representation in the ERHC.

Page 2 (paragraph D) of your letter of 14th July, 2020 cautions about the seriousness of “lying to the National House of Chiefs”. I hope you apply this caution to yourself in the matter of the clearly proven false allegations contained in the 2 letters authored by you and do the needful by rendering an unqualified apology to both the ERHC and the NHC for peddling such falsehood in the public domain since July, 2020.

Of the deepest dye of mischief is the allegation by your good self that the inclusion of Divisional Chiefs is intended by “some Paramount Chiefs … to be prominent and promote their QUEST to be SUPREME”. You single out Akyem Abuakwa for attack and allege that “Akyem Abuakwa has submitted as many as Sixteen (16) Divisional Chiefs to be included in the New Structure.” This allegation is also laden with falsehood.

It would appear therefore, that, contrary to your assertion, the allocation of 6 Divisional Chiefs to New Juaben in comparison to Akyem Abuakwa’s 8 and Kwahu’s 2 is very unequitable and far too generous. However, neither the Akyem Abuakwa Traditional Council nor our client is complaining. We will therefore entreat you to eschew sowing seeds of conflict and discord amongst Nananom.

ALLEGED EXCLUSION OF NEW JUABEN FROM THE DIVISIONAL ALLOCATION INTO THE ERHC.

We have sufficiently demonstrated above that this allegation is utterly false and malicious as, from L. I. 227 (2020), the Paramount Chief of New Juaben Traditional Area has the prerogative to nominate as many as 6 Divisional Chiefs unto the ERHC.

In general response to your complaints, we cannot fail to recognise the under currents of your fear about the possible “take-over” by new comers in the ERHC. This clearly seems to be the inspiration for the spirited assault you mount on our client’s hard earned reputation, all arising out of the well-intentioned effort to include some Divisional Chiefs in the ERHC. On page 1 of your letter dated 25th June, 2020, you allege:

“The composition as it stands or as it is being proposed is a steamy reactive delivery and unpleasantly obtrusive. It is a take-over by the new-comers who have come in their huge numbers. Eventually, all the Paramount Chiefs will lose their say at the House and be voted out on all issues during deliberations.”

“Another critical issue to resolve is the role that the Divisional Chiefs will be playing in the ERHC. This has to be debated and accepted by all constituents BEFORE inserting an inclusion clause with an appropriate cap….”

You did not sufficiently conceal your fears about the admission of Divisional Chiefs into the ERHC. I would urge you to look at the bigger picture, rise above those fears and support this move which will rather promote inclusion and development in the ERHC, as the purpose for which it was established by the laws of Ghana, has for far too long been adversely impacted by how it is presently constituted. We can take a cue from other Regional Houses of Chiefs which have long reformed their composition to include Divisional Chiefs. There has been no chaos or disruption of the roles and privileges of Paramount Chiefs as a result of the admission of Divisional Chiefs. It is to be noted that certain privileges of a Paramount Chief at the Regional House of Chiefs, like occupying the Presidency of a Regional House of Chiefs, are not extended to Divisional Chiefs.

We hope the foregoing will assuage your apprehension and tone down your resentment on this matter.

The President, National House of Chiefs

The Speaker of Parliament