NPP were not given different voters register - Afari-Gyan 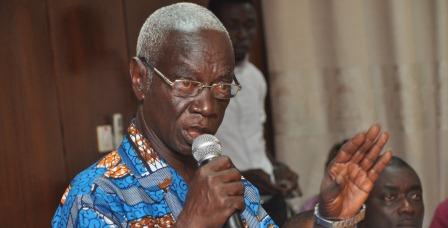 The Chairman of the Electoral Commission, Dr. Kwadwo Afari-Gyan Monday denied categorically that the New Patriotic Party were given a voters register different from the registers handed the National Democratic Congress for the 2012 elections.

His denial at the Supreme Court during his resumed cross-examination on the ongoing election petition, followed a suggestion by lead counsel for the petitioners, Mr. Philip Addison that the EC gave the NPP a different register from what it supplied the other parties.

According to Addison, the number of persons who were supposed to be verified for voting via ‘Face Only’ (FO) verification as per the register given the NPP was 3,196.

Dr. Mahamudu Bawumia, key witness for the petitioners during his evidence-in-chief had told the court that 3,196 voters had voted without going through biometric verification. But Dr. Afari-Gyan last week said the number was actually 70,951 voters who went through face-only verification and wondered where Dr. Bawumia got his figure from.

On Monday when the case resumed, Mr Addison suggested to Dr. Afari-Gyan that the discrepancy between the NPP’s figure on one hand and that of the respondents was because the EC had given the petitioners a different voters register.

Afari-Gyan also denied that the final register used for voting contained double registrations. He explained that the register was cleaned up before elections, having earlier agreed to suggestions that there were a number of double registrations but which he said did not resulted in double voting because the system did not permit it.

“Dr. Bawumia told this court that there were 3,196 FOs in the register, you dispute that.” Said Addison.

Afari-Gyan: Yes My Lord, the figure is much, much higher than that. In fact there is over 70,000 FOs nationwide.

Addison: Do you agree that in the register given the New Patriotic Party, there were 3,196 FOs.

Afari-Gyan: I do not agree My Lord because we gave them the same register that we used for the election.

Addison: The evidence before this court is that you gave them a different register from the NDC.

Afari-Gyan: I deny that categorically.

Sitting on Monday lasted less than usual as the parties were to meet accounting firm KPMG over its audit of pink sheets as requested by the court.

Nana Addo Dankwa Akufo-Addo, Dr Mahamudu Bawumia and Jake Obetsebi Lamptey allege that based on the face of the pink sheets, a number of malpractices and anomalies occasioned the 2012 polls whose results, as announced by the Electoral Commission that saw President John Mahama win, should be reversed in Nana Addo’s favour.