Politicians must focus on common good— Most Rev. Naameh 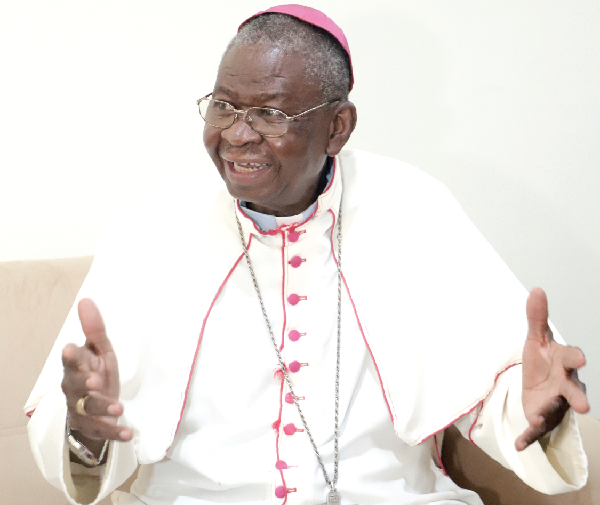 Most Rev Philip Naameh stressing a point during the interview
30.5k Shares

The President of the Ghana Catholic Bishops’ Conference (GCBC), Most Reverend Philip Naameh, has reiterated the need for political parties to focus on the common good of the people instead of serving partisan interests.

“The current political environment I would say is problematic. First of all, it appears to be departing from the tenets of democracy. If you look at what is happening in many aspects on the political front, it is very confrontational more than consensus-building. I think if you are talking about the service of the common good, this is not the way to go. Service of the common good has to engage people in the government, the opposition, the non-governmental organisations, the religious bodies,” he stated.

In an interview with the Daily Graphic, Most Rev. Naameh stated that “there should be a modality of frequently consulting all the stakeholders including the world of business. But we don't see that. In fact, I would say the current politics is polarising the country, dividing the country.

The full interview will be published in the January 15, 2022, edition of the Daily Graphic.

Most Rev. Naameh said the tendency of political parties, especially the NPP and NDC, to cater for their foot soldiers and card bearing members, before turning to possible future voters, was not good.

“The NDC comes in and provides its own solutions and NPP comes in and comes up with new things. This culture of missing continuity is what is also damaging the country. They leave behind everything that the previous government has done. I mean this is not a democratic culture.

“This does not serve the common good. There's nothing like an NPP Ghana. We are one Ghana neither is there anything like NDC Ghana. We have one Ghana. I think there must be a time to say that these people meant well. Let us put all that they did to good use for Ghanaians,” he stated.

Touching on concerns about the seeming silence of the GCBC on current national issues as compared to the 1970s, 1980s and 1990s, Most Rev. Naameh admitted that the concerns could not be debated.

He, however, pointed out that in the periods that the GCBC was vociferous, it was during military regimes where the citizenry could not talk or were afraid to speak up.

“The Catholic Church and the Catholic Standard were the only voices for the people. There was a vacuum which we were filling. The media landscape has completely changed and I think Ghanaians should recognise that. There are many media companies who are reporting on a daily basis what is happening in the country,” he said.

Most Rev. Naameh, who is also the Catholic Archbishop of Tamale, however, expressed concern about the morality and ethics of the media.

“The media is everywhere and every small thing they are reporting but how are they reporting? That is what we are very concerned about now. And this communication of insult for example doesn't go down well with us and this is what we take up now in our pastoral letters, in our communiqué and all of that, because this one, the others can't do it. You will get media people coming and saying things with no ethical considerations and sometimes without even researching thoroughly on what they are putting out there,” he stressed.