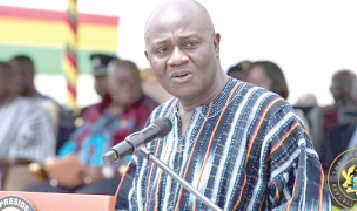 Nine Metropolitan, Municipal and District Chief Executives (MMDCEs) have been confirmed by their respective assemblies in the regions.

From Tema, Della Russel Ocloo reports that the President’s nominee for the position of Municipal Chief Executive for the Tema West Municipality, Ms. Anna Adukwe Addo, received an overwhelming endorsement from the 16 assembly members to become the second female to occupy the post of the assembly which was created in 2017.

The confirmation was incident-free and saw the outgoing MCE, Mrs. Adwoa Amoako, in attendance, a scene that brought about excitement on the assembly’s premises where the confirmation took place.

The Greater Accra Regional Minister, Mr. Henry Quartey, who witnessed the event counselled the MCE not to confine herself to the office, since the actual work was on the field.

"You owe your constituents a responsibility to addressing the development needs of the area," Mr. Quartey said.

The Greater Accra Regional Representative on the Council of State, Mr. Enoch Teye Mensah, in his remarks also advised Ms. Addo to be a leader who would carry everybody along particularly in striving to ensure equity in the distribution of development projects.

Still in Tema, Benjamin Xornam Glover reports that Mr. Yohanes Amarh Ashitey obtained 28 out of the 29 votes to be confirmed the Chief Executive of the Tema Metropolitan Assembly.

Six nominees of the president have been confirmed as chief executives for their various assemblies in the Volta Region, reports Mary Anane-Amponsah from Dzolokpuita.

The six formed part of the 18 nominees expected to be confirmed or otherwise for the Volta region.

The newly sworn-in Chief Executives assured their various assemblies of their commitment to work hard for the development of their people.

The Volta Regional Minister, Dr. Archibald Yao Letsa, called for unity for the development of the districts and municipalities.

He asked the assembly members to eschew partisan politics and focus on improving the lives of their people, noting that development was not about NPP or NDC but about the nation.

The renomination of Rebecca Yeboah as the district Chief Executive Officer for Atwima Nwabiagya North in the Ashanti Region has been endorsed by the assembly members, Daniel Kenu reports from Barakese.

She secured a 100 per cent endorsement last Friday bagging in 23 out out of 23 votes.

The elated DCE expressed appreciation to the President for the confidence reposed in her, promising to honour him with unparalleled local development projects.

Madam Yeboah urged the assembly members to bury their differences if any, and help push for more development in the area.

“If we unite as one people and collaborate, nothing can stop us from seeing and enjoying development," she added.