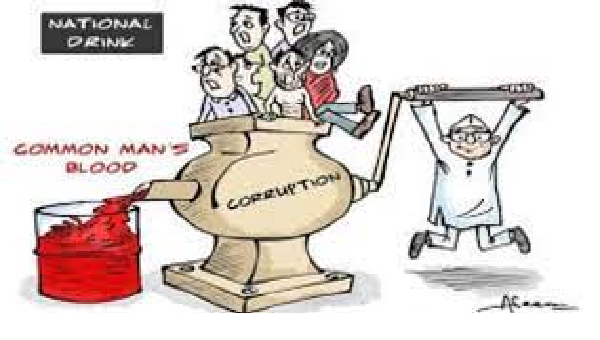 Man becomes great exactly in the degree to which he works for the welfare of his fellow men. — Mahatma Gandhi

The quest for greatness has led many to indulge in acts that promote corruption without regard for the welfare of other Ghanaians. This is because many approaches used to achieve greatness are inimical to the common good of society. As Mahatma Gandhi’s definition of greatness insinuates, what use is one’s greatness if other men perish as a result? Considering the dangerous repercussions of the increasing corruption incidents in Ghana, this article discusses positive influence, power, politics and impression management as another way to minimise the contagion.

For people to change their negative attitudes for the better, it is imperative for them to have access to impactful information that reshapes their perception about their experiences with people, ideas, organisations, institutions and situations. According to Kinicki and Kreitner, positive influence improves people’s thought processes, understanding, interpretation and actions towards achieving positive results. Research reveals nine generic influence tactics, out of which four are selected in minimising corruption.

The four possible ways this may be accomplished are 1) rationally persuade people using reason, logic or facts to do the right thing; 2) to inspirationally appeal to people’s emotions, ideals or acceptable values; 3) to use ingratiation, where the influencer gets the other party in a good mood before discussing the proposed change in a friendly and caring manner while praising past good deeds; and 4) link request to change for good to friendship and loyalty so the corrupt individual may feel a sense of belongingness and change for the better. It is also proposed that this approach is applied to elected officials or employees during their orientation periods to minimise corruption.

One cannot influence change without the social power to do so. The positive usage of power yields good results. Kinicki and Kreitner defined social power as the “ability to marshal the human, informational and material resources to get something done”. Unfortunately, corruption encourages the misuse of quality human and non-human resources. Consequently, we have retrogressed significantly compared to countries that gained independence at the time we did. We shamefully refer to their progress and visit these countries to enjoy their successes without emulating their use of social power to achieve development. Ghanaians must use social power in the form of gratification to institute ethical standards along with checks and balances for national development. To minimise corruption, people must be made aware that Ghana is for all Ghanaians and not for a select few. Leaders are meant to serve those they lead, but not to always impose decisions on them, which affirms Kurt Lewin’s assertion that “we are likely to modify our own behaviour when we participate in problem analysis and solution and likely to carry out decisions we have helped make”.

The social power we wield in achieving our hearts’ desires is meant to protect and seek the common good. Also, our social power is meant for us to make an impact so posterity may build on what they inherit.

Politics is not completely bad. According to Merriam-Webster’s dictionary, politics is a multifaceted word, which has descriptive and non-judgmental meanings relating to “the science of government” and "political principles", but also carries a negative connotation characterised by deceitful and dishonest practices for selfish gain. Within the context of this article, attention is paid to the use of the positive politics to curb corruption. The most important approach is for leadership to use political will to ensure the resourcing of all corruption-fighting machinery. According to Derrick Brinkerhoff, political will is the “commitment of actors to undertake actions to achieve a set of objectives…and to sustain the costs of those actions over time”. Political will in action encourages transparency, efficiency, honesty and strength of institutions, as well as citizen participation, which goes beyond press conferences where leadership talks at the citizenry instead of with them. Actors in institutions that perform checks and balances need motivation and protection to achieve results.

Asha, Schmidt and Murray explained impression management as “the process by which people attempt to control or manipulate the reactions of others to images of themselves or their ideas”. Kinicki and Kreitner expanded on this definition by stating that impression management included “how one talks, behaves and looks”. The objective of managing one’s impressions is to make others perceive you as the best around—a good, well-comported and well-dressed individual who is very respectful, hardworking, humble, harmless and capable of achieving goals. Negative characteristics of impression management include but are not limited to bootlicking, good appearance and tale-telling about fellow colleagues. Just as influence, power and politics have their positive and negative sides, so does impression management. Moreover, evaluation of employment processes is required to avoid employing over-ambitious individuals without the requisite skills and attitude, who become the little foxes that destroy organisations.