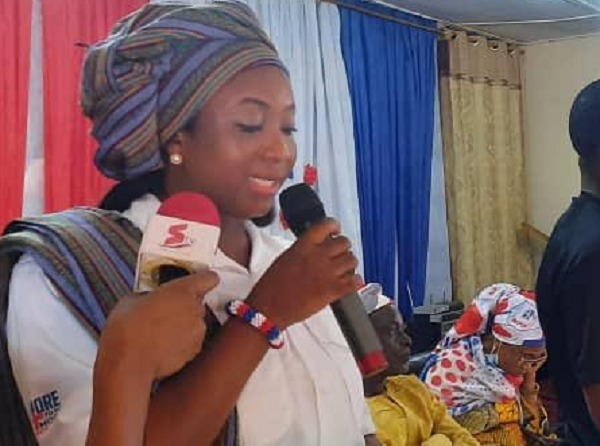 The hearing-impaired community in the Northern Region, Deaf Youth for the New Patriotic Party (NPP) has congratulated President Nana Addo Danquah Akufo-Addo for winning the polls.

The Electoral Commission (EC) on Wednesday, December 9, 2020, declared Nana Akufo-Addo as the winner of the presidential election held on Monday, December 7, 2020.

Nana Akufo-Addo who contested the election on the ticket of the New Patriotic Party (NPP) won with 6,730,413 votes which represent 51.295 percent of the total valid votes cast.

The total valid votes cast was 13, 434,574 representing 79 per cent of the total registered voters.

The group which was very instrumental in the success chalked up by the NPP in the northern region also commended all NPP Members of Parliament elect for the victory secured in the general elections.

Speaking in an interview, the Founder of the group, Madam Radia Adama Saani commended Ghanaians for the peaceful manner in which they carried themselves throughout the elections.

"Ghanaians have demonstrated that our democracy is truly maturing. The conduct displayed throughout the campaign period, to the time of the elections and after the declaration of results suggests that all our citizens really cherish our fragile democracy".

The entrepreneur & politician explained that the image Ghana portrays on the global stage would further be enhanced following the collective rallying support the people of Ghana gave to the governance process.

This, she noted, would impact the country's democracy, peace, stability, and ultimately translate into sustainable development of the country.

This special group, with the supervision of their leader Radia Saani, campaigned in the northern region among the deaf society using the sign language in constituencies such as Yendi, Karaga, Gushegu, Kumbungu, Tamale Central, Sagnarigu, and Savulugu.

According to the founder, the aim of the group was to bridge the gap existing between the party and the hearing impaired community in the country especially in the North.

"They truly showed up in the campaign and during the elections, therefore I believe strongly that their toil and sweat has not been wasted…We want to once again congratulate President Akufo-Addo for gaining the support of Tom - Dick and Harry to overcome his opponents to emerge victorious during the elections" she added.

For her part, the Municipal Chief Executive (MCE) for Nagnarigu Municipality in the Northern Region, Hajia Mariam Iddrisu, reiterated the party's commitment to addressing problems facing persons with disability and an initiative taken up to propose the provision of hearing-impaired Secondary Schools in all regions across the country.