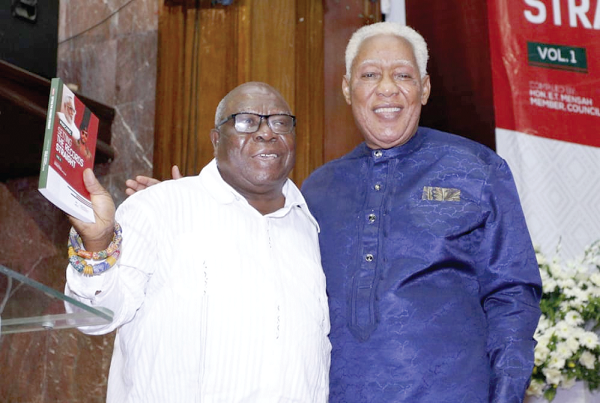 Mr Daniel Abodakpi (left), a member of the Council of Elders of the National Democratic Congress, launching the book with Mr Mensah, the author. Picture: NII MARTEY M. BOTCHWAY

A 309-page book chronicling the journey of the Provisional National Defence Council (PNDC) through to its offshoot, the National Democratic Congress (NDC), has been launched in Accra.

The book, authored by a Member of the Council of State, Mr E.T. Mensah, takes readers through a step-by-step journey of how former President Jerry John Rawlings led a team of dedicated men and women on a laborious sacrificial task of carrying the destiny of the nation on their shoulders.

The foreword of the book, titled “PNDC/NDC Setting The Records Straight (Volume One)” was written by former President Rawlings before his demise.

It explains the policies, plans, programmes and projects of the Rawlings regime, including the famous Economic Recovery Programme (ERP), the Programme of Action to Mitigate Social Cost of Adjustment (PAMSCAD) and the junior and senior secondary school system.

In addition, it talks about the mapping of mineral resources, trunk roads rehabilitation, the foundation of primary healthcare programmes, local government reforms and the genesis of land administration reforms and land title registrations.

In the foreword, Flt Lt Rawlings said among other things that “I commend E.T. Mensah for his bold initiative in the compilation of this book. He has captured to the best of his ability some of the major hallmarks of my administration, including the shortcomings and how we mitigated those shortcomings”.

At the launch of the book last Friday, which was attended by a host of personalities including the Ga Mantse, King Tackie Teiko Tsuru II, and a member of the Council of Elders of the NDC,
Mr Dan Abodakpi, Mr Mensah said he hoped that all who would purchase the book would apprise themselves with the PNDC/NDC administrations.

“At least from the review, you can see that this book is not self-serving. This book tries to give objective accounts of the December 31 Revolution, the PNDC and the NDC,” he said.

In his remarks, Mr Mensah said the book was a testimony of the adage that a “journey of a thousand miles begins with the first step”

He said the admission from former President Rawlings showed that “he did not do the work alone and that it was team work that made us all achieve what we were able to achieve.”

“It was never about a single individual; it was always about all of us contributing our quota to building a better Ghana. All true and great leaders never hesitate to give credit to teams and do not take all the glory,” he said.

Mr Mensah, a former Minister of Youth and Sports, said the ability of Flt Lt Rawlings to discover and nurture talents was a hallmark of his astute leadership style.

“The PNDC and its democratic offshoot, the NDC, has very illuminating stories to tell, and this book is my humble contribution to telling such a story based on nothing but pure facts,” he emphasised.-

“I had to set the records straight for the sake of the team I worked with and for posterity to judge us properly based on facts and not based on misinformation,” he added.

Reviewing the book, a former Minister of Defence, Dr Benjamin Kunbuor, said among other things that the story was grounded in political and social theory, history, political economy and national reconstruction.

“The opening conceptual chapters in part one give the story focus and perspective and is presented in a well-written prose devoid of the verbosity often associated with similar stories,” he said.

The first three copies of the book were purchased by the Ga Mantse, King Tackie Teiko Tsuru; the Nungua Mantse, Nii Odafio Wulentsi, and the Council of State.