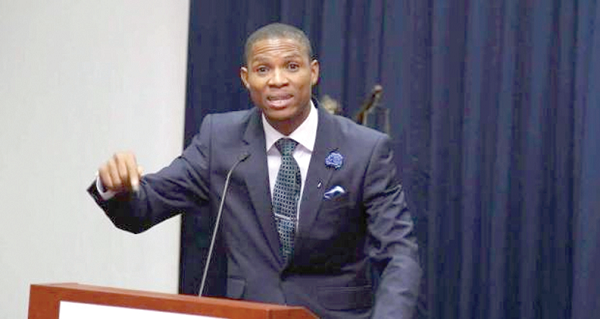 In a motion on notice, the Madina Legislator is praying for the enforcement of his fundamental human rights.

Sosu is seeking an order that the attempt by Officer of the IGP to arrest him on October 25, this year without informing him (Sosu) over reasons for his arrest was unlawful.

He is also seeking an order of the court that the attempt by the officers of respondents to arrest him at the church without reason, was unlawful.

The Legislator is further seeking an order of the court directed at the IGP to pay him compensation for unlawful and unwarranted breach of his (Sosu) human rights.

The applicant (Sosu) is seeking a declaration that the conduct of the IGP was in breach of the standards of "fairness and reasonableness under Article 23, proper use of discretion under Article 296 and all implied rights inherent in a democracy intended to secure the freedom and dignity of man which include, the right not to be subjected to arbitrary and malicious prosecution under Article 33 (5) of the 1992 Constitution."

Applicant is seeking "a declaration that the Police action violates rights to protest and demonstrations."

In his affidavit in support of the motion on notice, the MP said on October 25, this year, as part of his parliamentary duties, he led the chiefs, elders and youth and organisation associations along the Ayi Mensah, Kweiman, Danfa, Adoteiman and otinibi to protest and demonstrate against the deplorable roads in their communities.

According to Sosu, the said demonstration was done in accordance with the Public Order Act and there was no destruction of public or private properties and "we recorded no casualties."

"That said peaceful protest and demonstration was done in the glare of the media and Police officers who were with us throughout the demonstration, and there was no single news item of any destruction of public property."

According to him, in his capacity as MP, he picked up intelligence that the community wanted to take the law into their own hands and hit the road and demonstrate on account of the bad roads.

Based on the intelligence, Sosu said he reached out to the various community leaders and the various stakeholders and a communique dated on September 27, 2021, by which a 14-day ultimatum was given to the government for contractors to show up within the communities.

He said after expiration of the ultimatum and without any response, he issued a letter to the Ghana Police Service through the Divisional Commander at Adenat/ Abokobi.

The Legislator said the said letter was dated October 11, this year, he notified the Police about the intended protest on October 18, this year.

He said he received a response from the police that the said demonstration should be held on October 25, this year.

Sosu said after the said demonstration, he admonished the youth that the reasons for the demonstration was to draw the government's attention to the plight of roads.

Soon after addressing the youth, Sosu said the Police informed him that the Police needed to send him to the Commander to answer a few questions.

The MP said he informed the Police that he was on his way to Parliament for some Parliamentary duties. The Police insisted that I go with them.

"That the attempt by two officers of the respondent to publicly arrest and manhandle me amounts to an act intended to impede and obstruct the legitimate discharge of my duties as a Member of Parliament and the said act is an affront to the Parliament of the Republic of Ghana."