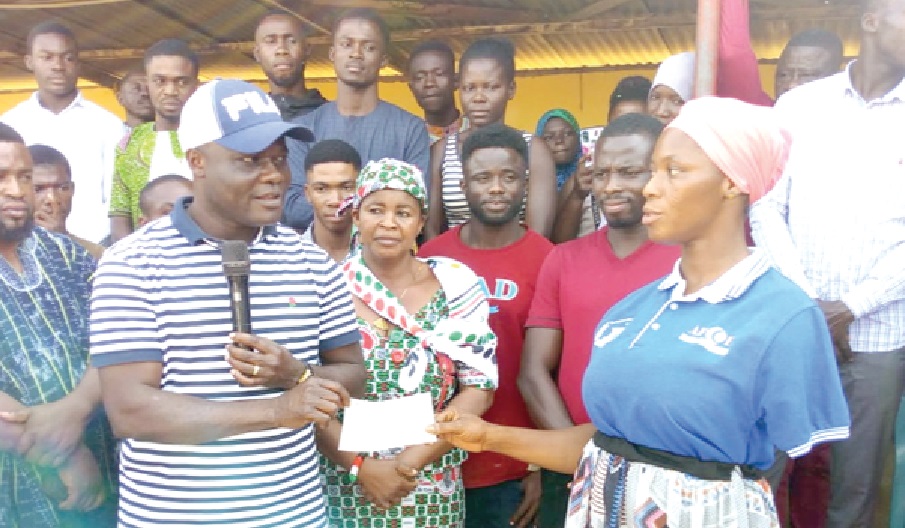 Ahmed Ibrahim (left), MP for Banda, presenting a cheque to one of the beneficiaries
30.5k Shares

The National Democratic Congress (NDC) Member of Parliament (MP) for Banda in the Bono Region, Ahmed Ibrahim, has offered scholarship packages to 137 needy tertiary students in the constituency at a total cost of GH¢343,900.

The beneficiary students are in the first, second, third and fourth years in various tertiary institutions, including colleges of education, nursing training colleges and technical universities.

Funded from the MP's share of the District Assemblies Common Fund (DACF) and Ghana Education Trust Fund (GETFund), it is to cater for tuition fees and academic research for the 2022/2023 academic year.

The packages range between GH¢1, 000 and GH¢10, 000, depending on the amount of money quoted on the admission or school fee letters of the beneficiaries.
In addition, the scheme managers in the area have received 42 fresh applications to access the fund to enable them to pursue tertiary education.

Speaking to journalists after the presentation, Mr Ibrahim, who is also the Deputy Minority Chief Whip in Parliament, said a plan had been put in place in the constituency to produce 50 medical doctors in the next 10 years, through the scholarship scheme.

He said so far, the scheme had sponsored seven medical doctors from the constituency, explaining that producing 50 doctors in the next 10 years would not be a lip service.

He was optimistic that the constituency would meet the United Nations Sustainable Development Goals one, two and eight (SDGs) by 2030 which aimed at reducing poverty, ensuring zero hunger and creation of decent jobs, respectively.

Mr Ibrahim said he was passionate about the empowerment of the vulnerable in the constituency, explaining that in 2009, when he became MP, there were only 12 tertiary students in the area, but through hard work, the figure had increased to about 300 in 2022.

Mr Ibrahim said the constituency had planned to focus on engineering education, explaining that engineering was the way to go.

He said countries such as China concentrated on engineering and explained why it had become the manufacturing hub of the world.

He, therefore, encouraged junior and senior high school students to pursue courses such as Medicine, Engineering and Information and Communication Technology (ICT).