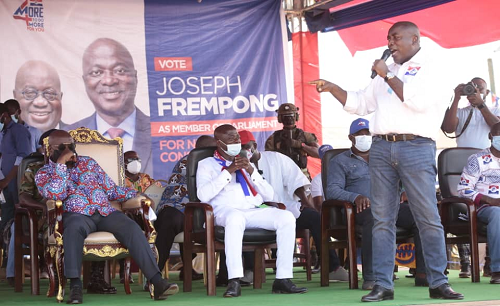 A former General Secretary of the New Patriotic Party (NPP), Mr Kwabena Adjei Agyapong, has stated that President Nana Addo Dankwa Akufo-Addo is the best person who can secure the security and progress of the country.

He said in the last four years, President had demonstrated to the world and Ghanaians in particular of his excellent leadership skills, spectacular demonstration of empathy and numerous socio-economic policies and programmes coupled with marvelous social interventions.

Mr Agyapong who is a member of the President Akufo-Addo's entourage campaigning for the 2020 polls was addressing party supporters at the Nkawkaw Methodist Park in Nkawkaw on the first day of the two-day campaign tour of the Eastern Region.

Spotting his usual white long sleeve shirt and a pair of stone-washed jeans trousers, Mr Agyapong called on the electorate to renew the mandate of President Akufo-Addo with larger margin.

He pleaded with President Akufo-Addo that as a gesture of the symbolism, he should develop the park into an AstroTurf during his second.

Mr Agyapong said he had travelled the length and breath of the country with the President in the last two months and described as marvelous the amount and quality of work the Akufo-Addo Administration had done within the four years.

He said Ghanaians have really been touched by the fairly distributed nature of the infrastructure and policies which had made
Ghanaians to yearn for a President whi had compassion, cared about the future of children irrespective of the social and economic standing of their parents, visionary and had the welfare of the people at heart.

Mr Agyapong explained that Akufo-Addo had proven beyond all reasonable doubts through his numerous policies and programmes and infrastructure development that he was the epitome of these qualities.

He said the 2020 polls was between John Mahama who had been Vice President and Head of Economic Management teams for four years and additionally as President of Ghana for another four years and President Akufo-Addo who has been in power for only four years.

Mr Acheampong said former President Mahama had all the opportunities and time in the world to do everything he wanted to do for the people of Ghana but rather made things worse and difficult for the people while President Akufo-Addo had provided quality leadership that had benefitted Ghanaians with just four years.